Days and Days and


Last week was a busy work week.  By work – I mean physical labor.  Last Monday morning at 630am (the sun barely up), I went out and mowed the back yard.  OK, first of all, I hate to mow.  It’s boring.  The extension cord for the mower weighs, oh I don’t know, 75, 80 pounds.  My yard is not flat and smooth – it’s bumpy and full of plants (yeah, ok I put them there) and trees (I may have planted one or two of those) and other stuff.  It is not in my job description!  Generally, I mow half the back yard (it’s really a big yard) one day, the other half the next, the front on day three.  At 630am last Monday morning, it was 80° with 80% humidity – feeling like 284°. 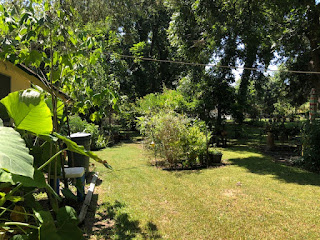 Takes me about an hour for each mowing.  I’m sure Michael is looking on from somewhere pointing out the places (holidays, he called them) I missed.  I ignore his comments.  Odd fact – I walk about 3 miles per section to mow.  I hate to mow.

And, other than yoga at 5pm, that was pretty much IT for me on Monday.  I find, as I grow older, I don’t have quite as much “oomph” as in previous years.

Tuesday, it rained – not too much but still water from the sky.

First rain in about six weeks.  So, I was pretty much confined to inside the house stuff.  I moved furniture.  And cleaned out the closet in the back room which was a big deal all by itself.

Wednesday morning I walked outside for a minute and had to check my calendar – what month is this?  Cool, little humidity, comfortable, whoa.  Ok, still July but felt like late October – sooo nice.  I met up with a friend and we walked a huge circle around my neighborhood and then down to the river, past the Dinosaur Park (yes, Wharton has a Dinosaur  – doesn’t everyone?) 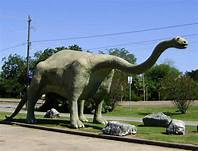 To a woodsy area with a spectacular view of the Colorado and the “Pennsylvania through truss bridge” (a 2-part, steel truss and concrete highway bridge crossing the Colorado on a north south axis. It consists of two Camelback Parker-through truss sections. Each of the two sections is constructed of eight panels. Short approaches to the truss sections are along concrete decking with concrete curbs and pre-cast concrete guard rails. large concrete pylons support the bridge with the largest pylon being approximately in the center of the Colorado River.  Just in case you’re a bridge person.) 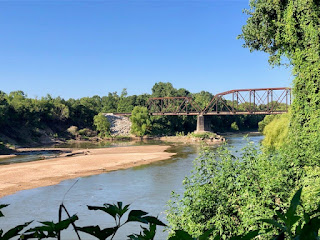 Thursday it was coolish outside again and I put on my mowing togs and finished the back yard, cut back a bunch of trash trees, pulled up weeds, planted a couple of things (yes, I know – bad time of the year but otherwise they’d have died in their pots). 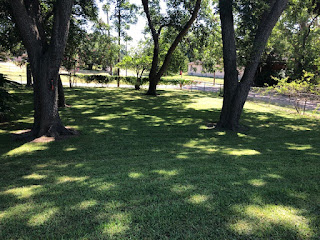 Saturday my grandchildren came over (Brian from Katy and Vicky and Josh from San Antonio) to spend the weekend.  So nice.  Our long-term goal was to watch season 3 of Stranger Things.  If you haven’t watched Stranger Things, it’s really good and is on Netflix.  The only spoiler I’ll offer – If you’re like me, you cut the show off when the credits start to roll.  Don’t do that on the last show of season 3 – watch until everything is done. 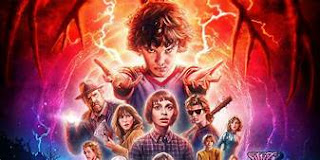 Plus they did several chores for me – like getting on the roof to cut back pecan tree branches, then cutting back more that were getting entangled in the wisteria, cutting up another fallen branch, and piling it all by the street.

Sunday, everyone went home.  Sunday, we got two inches of rain.  YES!  I’m sure my plants were sucking the water right out of the sky.  Sunday night I was sitting in my chair and heard – tink, tink, tink.  What the . . . .  Zack was between the buffet and dresser slapping something around. 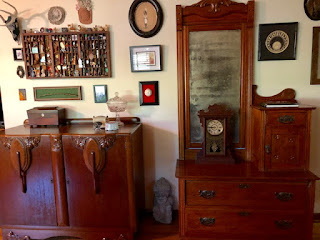 As I walked over, he slapped it under the buffet.  I reached under to get whatever it was a n d . . . . .  something grabbed my fingers!  I jerked my hand out from under there so fast and hard, I slammed my elbow into the dresser.  Owie, owie, owie owwwwwww!

Ok, ok – it was Daryl.  And they were playing with this 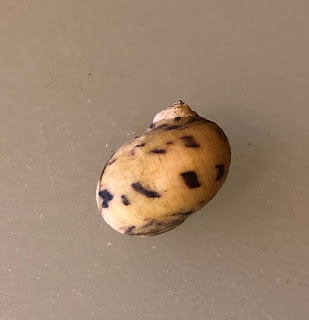 And, speaking of the Demon Duo, they are fine these days.  Getting into everything.  Pictures like this being the only thing keeping me from putting them both out for the trash! 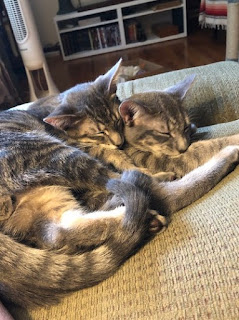 Finally, the rain on Sunday produced these – Texas native passion vine flowers.  They’ve had buds for a month but it’s been so dry the buds just dried up and fell off without opening.  Yesterday, about half a dozen opened.  It’s the reason I don’t jerk this fast growing, invasive vine out of the ground and salt the ground. 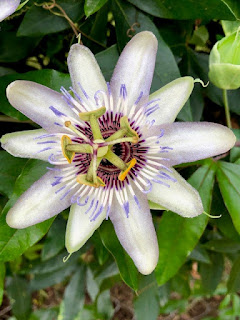