I am occasionally surprised by things I find at my grocery store.  Well, actually, I shop at Walmart – I don’t like our only grocery store.  Anyway – while doing a little shopping, I stopped in front of the jelly/jam/preserves isle.  Did I want any ? ? ?  hmmmm.  (yes, no, maybe).  Then, I saw something new - 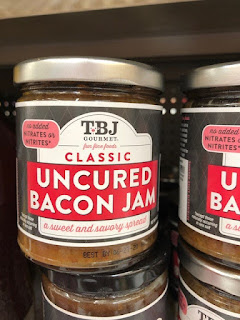 According to what I read – “Bacon Jam is a bacon-based relish that is made by slow cooking bacon, onions, garlic, brown sugar, vinegar and spices.”

A description said “spreadable meat immersed in liquid. It looks a little like the contents of a sink’s garbage disposal. At first taste, it’s sweet, like any fruit jam would be. It has a baby food-texture that ends in little chewy bits of meat. The sweetness subsides and opens up a smoky, savory roundness that eventually lands on a tart aftertaste.”

One man recommended “toasting a sliced baguette and drizzling olive oil on it, then spreading a bit of jam on each piece during a dinner party” yes, of course, I go to/have those all the time.  A couple other suggestions were

On a PB&J (sorry, that sounds just a bit weird to me)
On top of avocado toast
On top of waffles (this sounds sorta doable)
In s’mores (so what – you’d spread it on a graham cracker, add a Hershey’s chocolate square, and then the melted marshmallows??? – ewwwwww gross – tho, truth said, I don’t eat marshmallows – ever - so that may color my perception)
With vegetables
In a grilled cheese (maybe)

Actually, jelly/jam wasn’t on my shopping list at all so I passed it by.

Then I walked through the produce section.  More and more I see unusual fruits (you know, not  just watermelon, cantaloupe, peaches, plums).  Today they had
Now, I’ll bet you think dragon fruit is native to southeast Asia.  You’d be wrong.  It has its origins in Mexico, South and Central America.  I haven’t ever tried it but, after reading all sorts in interesting things, I think I might get one next time I’m at the store.

Dragon Fruit is rich in nutrients and low in calories, may be beneficial for fighting chronic illnesses, improving gut health, and boosting immunity. It is high in fiber as well as various vitamins and minerals including manganese and iron. Health benefits of dragon fruit include its ability to aid in weight loss, control diabetes, improve digestion, lower cholesterol, and boost energy levels. It may also be protective against certain cancers and heart diseases, defend against bacteria and fungi and optimize the overall functioning of the body.  It tastes a bit like a cross between a kiwi and a pear.

It grows on a type of cactus - Hylocereus Species, common names - Dragon Fruit, Strawberry Pear, Night Blooming Cereus, Queen of the Night.  (I like Queen of the Night best – know why they call it that?  Because, the flowers are showy, fragrant, and only come out at night.) 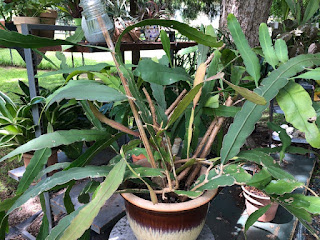 TaDa!  I have one of those, although mine hasn’t even bloomed since it sat under nasty river water for three days in 2017.  It is, however finally starting to look like a healthy plant again.

Well, the kitties had just discovered that I’m at my desk and there MUST be something up here they both need.