After leaving the Crescent Hall and the Creative Arts display, we walked over to Ammann Barn.  And, oh shuckie darn, we missed the Senior Citizens Polka Dance at the Gym. 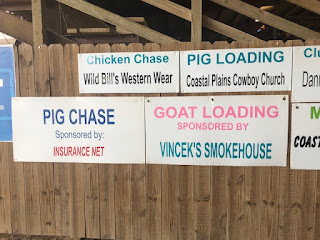 Some of the events.

When we found the barn, cattle judging was in process.  We stopped to watch for a while and I was impressed by several things 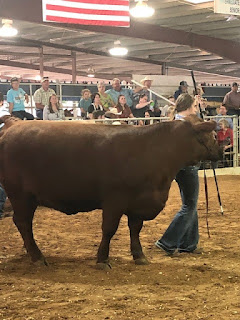 Cows are big – like really, really big.  These cows were not only big, they were perfectly groomed and well behaved.  As far as I could tell, each participant showed three.  The judge stood in the middle of the arena and just looked at them front-wise, back-wise and side-wise.  She never touched them, never even went close.  I just wonder, what are the judging parameters? 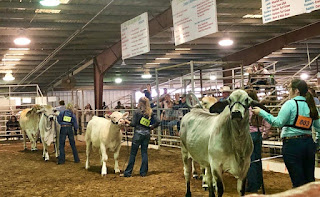 For the most part, the participants were young women – I’d guess 16 to 18 years.  They hauled those cows around like they were showing off little dogs.  The cows had to stand in a specific position (front legs forward, back legs parallel, head up) and those girls pushed, shoved, cajoled, and held them just so. 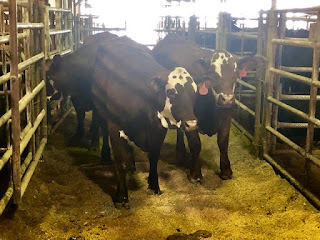 In a cow like manner, these were all pretty – well fed, washed, nice markings – not very friendly though.

We stood there and watched for a while and then, moved on.  You can only watch cows for so long. 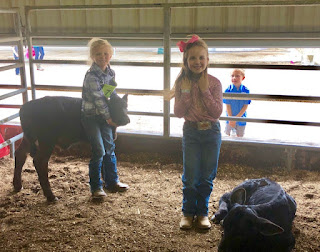 We passed another arena where young children were showing their calves.  I tell you what – those kiddos hauled those rowdy calves around with little problem and determination.  These two cowgirls had just returned to their holding area.

Next we came across pigs. 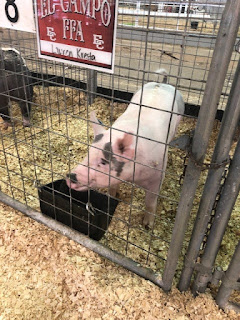 Fact:  Pigs constantly communicate with each other. They have a range of different oinks, grunts and squeals which have distinct meanings.  Yep, this one saw its neighbor get dinner and was very vocal about not getting any! 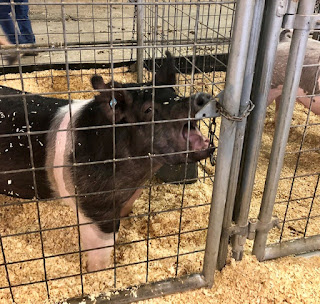 Fact:  Pigs are extraordinarily intelligent. They are curious and insightful animals who are widely accepted as being smarter than most 3year old humans, dogs, and some primates.  Yep, this guy was steadily working on unlatching the gate! 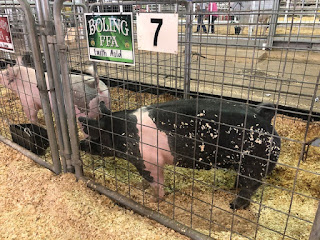 Fact:  They’re actually quite clean. The pig’s reputation as a filthy animal comes from its habit of rolling in mud to cool off because they don’t sweat.  And, like the cows, in a piggy sort of way, they were all pretty.

Next – sheep.  Sheep weren’t as entertaining as the pigs or even cows.  First of all, they all looked exactly the same.  They were all the same color, same markings, same shearing, same-o-same. 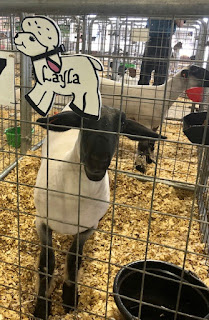 And, Did You Know? – sheep are from the same family as cattle, goats, buffalo, camel, and llamas.  The oldest organized industry is raising sheep.  A sheep only has eight teeth, which it grows two a year.

Goats – the goats were more entertaining.  The hopped around in their pens and sort of played with the goat in the next pen.  Or, they stood up and looked over the fence. 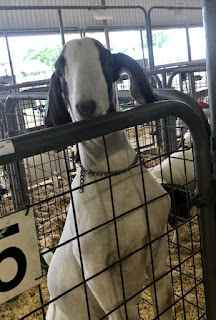 Yes, yes – a few Goat facts:  Goats are herd animals and will become depressed if kept without any goat companions.  Goats’ pupils are rectangular. This gives them vision for 320 to 340 degrees (compared to humans with 160-210) around them without having to move.

The last show animals we saw were rabbits.  They were all exactly the same.  And they just sat there. 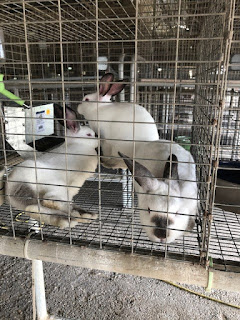 From the barn, we went over to the Ag Adventure.  It was a little Ag Learning Center.  Actually pretty interesting for those of us that are city people.  There were churns, spinning wheels, carding combs – all kinds of things used in the long past times.  There was an incubator with eggs and a couple of new chickies. 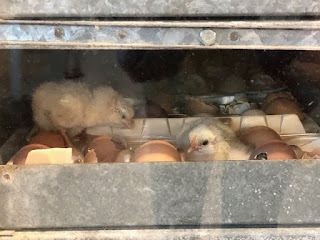 And, there were a bunch of interesting Did You Know? facts – like

What plant offers both food and fiber = cotton

Finally, tomorrow – Going to the Carnival!