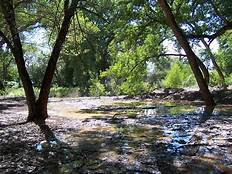 A bosque is a type of forest found along the “riparian flood plains of stream and river banks” (t’was it here, I’d call it marshy land) in the southwestern United States.  The word bosque = the Spanish word for woodlands. 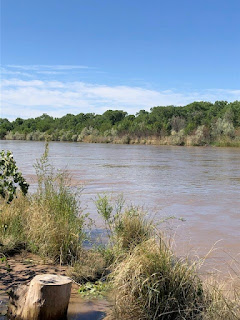 The most significant bosque in the US is the 300-mile area along the middle Rio Grande in New Mexico that extends from Santa Fe south to El Paso, Texas.
The forest itself consists mostly of Rio Grande Cottonwood Trees along with Mesquite, Desert Willow, and Desert Olive trees.  Rio Grande cottonwoods have been growing in the bosque for more than a million years.  They reproduce by seed which are carried through the air by white cottony tufts.  And, that day, the seeds were flying everywhere! 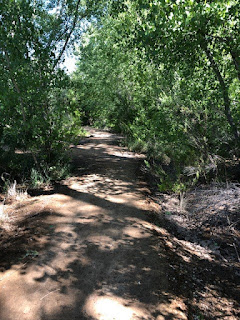 Most of our walk was along the Paseo del Bosque Trail – a designated path for bikers, runners, and walkers about 16 miles alongside the forest on one side and Tingley Beach on the other.  There are many paths through the forest itself and we walked down to the mighty Rio Grande.  Walking along the Paseo del Bosque was full of people.  Bikers, as they approach, are supposed to shout out – “Passing on the left, on the left”.  We were passed by a family lead by two young girls that gave us plenty of warning.  Then, there were also the jerks on their racing bikes that just swerved around without warning.
On the other side of the path is Tingley Beach, an area with a large fishing lake, sandy beaches, picnic tables, flower beds, and an event venue. 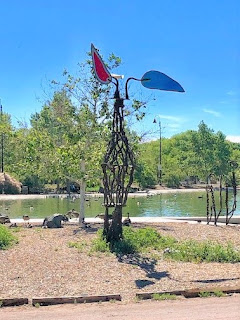 Mornings in Albuquerque are still very cool so the walk along the bosque was really nice.