Saturday, Denise and I went the Petroglyph National Monument.  It’s a 7200 acre national park that includes three canyons filled with 800+ petroglyph.  There are three canyons you can hike.  We chose Rinconada Canyon.  It’s a 2.2-mile loop with over 300 petroglyphs.  And, it’s all uphill.  The trail is rated East to Moderate (hahahahaha) and it’s ALL UPHILL!  Also, as a flatlander, I can say, there is little oxygen there! 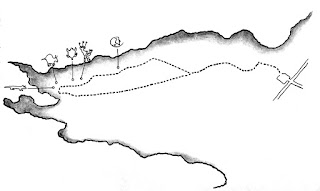 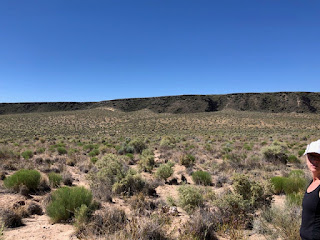 Archaeologists have determined the designs and symbols carved on the volcanic rocks by ancestral Puebloans and Spanish settlers date from 400 to 700 years ago.  Pueblo elders believe the images are as old as time. They also believe that the petroglyphs choose when and to whom they reveal themselves.  Yes, I think that’s true.  A couple in front of us had trouble seeing them.  Of course, it’s impossible to get up close.  First of all, the area is rocky and would include some serious scrambling but mainly because, I suspect, that humans in general are not trustworthy enough to not deface them in one way or another.  So, if you ever go, you might want to bring binoculars to see up close and personal. 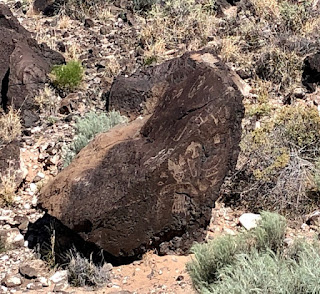 The images include human-like figures, concentric circles/spirals, animal figures, and geometric designs.  Many Southwest Indians are able to claim cultural relationships to past inhabitants of this area because they recognize the images as having deep cultural and spiritual significance. 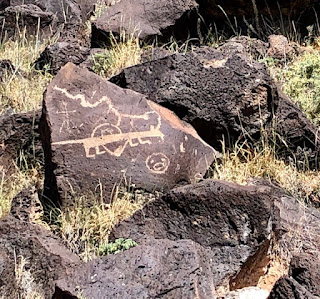 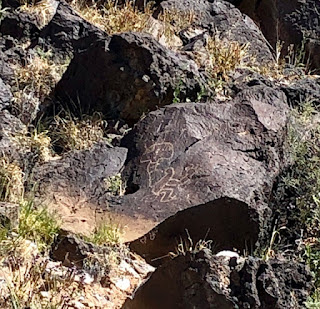 A petroglyph is an image that is carved into a rock (vs pictograph which is a drawing or painting on the rock).  These were probably made using two stones; a “hammer and chisel” sort of thing that gave the artist the ability to peck images with detail. 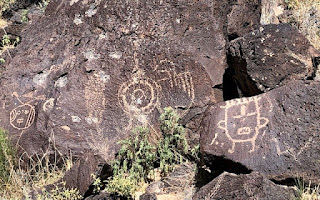 The Spanish arrived in this are in the early 1500’s and they also left petroglyphs. 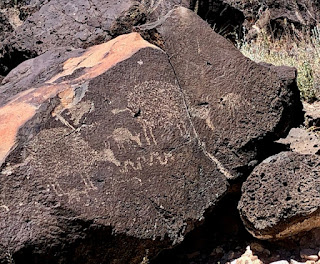 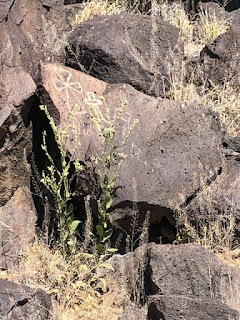 As with any hiking in this area – remember you are in high desert.  It’s hot and dry.  Carry water and drink often.  Wear a hat as there is no shade at all.  Also, wear good walking shoes.  The first half of the trail is in soft sand so sandals would be uncomfortable at best.  Through out the walk there are signs to stay on the path.  The volcanic rock is fragile and the surrounding area is steep.  Plus, there are signs warning to watch for rattlesnakes. 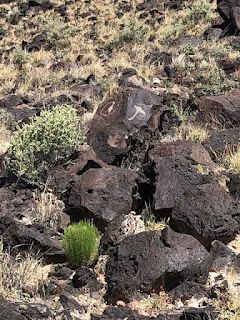 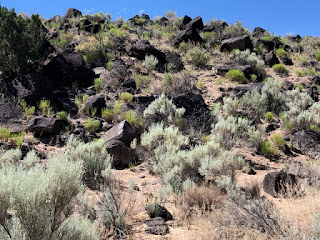