My daughter lives in the southeast part of Albuquerque. 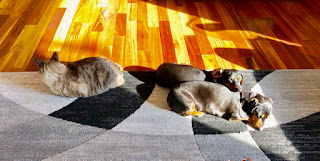 3 dogs in the sun.  Looks like 2 dogs and
a cat but really, Kevin would rather hang
with Rose and Iris, so 3 dogs.

It’s a nice area and every morning and evening I try to get out and walk a couple miles.  During those walks I find all kinds of interesting plants that I know I can’t grow at home but want to! 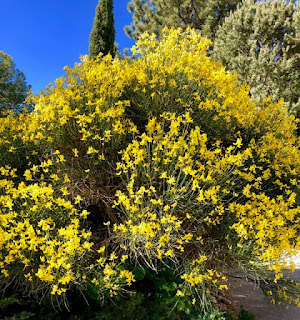 Forsythia – while I have grown it at home
it needs more cold weather than we have and
it does NOT get to be 6+ ft tall like these! 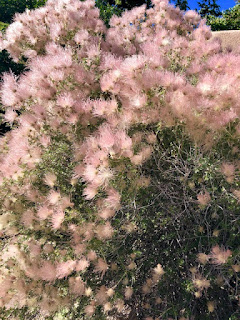 I don’t know – it’s a shrub.  The blooms start as
a little white flower then pops into these pink
fuzzy things 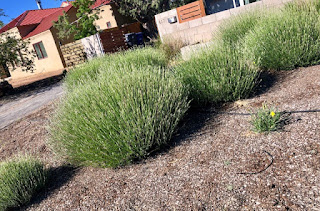 Lavender – omg – this entire front yard is a
lavender field and the bushes are 3½ ft tall
and about to burst into bloom! 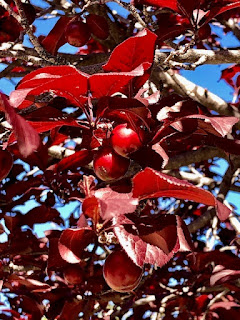 Cherry trees and the owner
is letting them FALL ON THE GROUND.

Today I walked a different direction and saw this piece of yard art.  Very cool. 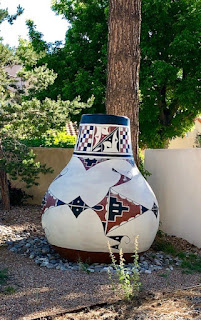 I keep reading from others about the strange weather everyone is having.  Here too.  Now, I’ve been to Albuquerque in the spring.  Temps tend to be cooler than home but still shorts and tee’s weather.  Last week, the temperatures dropped alarmingly.  I had to borrow a coat for my morning walk!  The temp never got higher than 51°!  The heat in the house came on!  One day we got up to see the mountains covered with snow – snow, in May!  I’m pretty sure that’s wrong.  Then, yesterday while Charlotte and I were out, the wind started up, blowing about 30 mph.  It was like walking in a wind tunnel.

My daughter gave me a Fitbit to help track my exercise.  It thought I had walked up 9 flights of stairs by the time we got back home after windy walking.  The Fitbit is a fun thing.  It counts steps and turns them into miles (2.37 so far today), monitors my heart beat (66 bpm), number of calories burned (736), how I slept (restless), and a few other things.  I like that it tells me how much exercise I’m getting – makes me feel less of a couch potato.  Plus it buzzes me when I've been sitting too long.  (Time to take a stroll - try for 275 steps!) 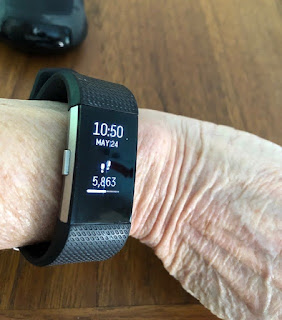 Kirtland AFB is also in the SE part of Albuquerque and each morning at 7am, reveille sounds with a bugle call followed by the playing of “To the Colors.” which signifies the start of the duty day.  Then, at 5 p.m., retreat is sounded, followed by the National Anthem, signaling the end of the official duty day.  I know this because I can hear it from her back yard.  Pretty cool actually.

Last weekend, Kirtland AFB had an air show starring the Thunderbirds.  We didn’t have to go because we could just sit on the patio and watch the planes as they flew over.  Those guys are really loud and it's just a little scary to watch. 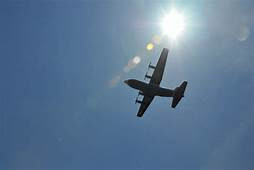 Look close to see the jets

I think tomorrow we’re going to either the Petroglyph Monument or the Coronado Historic Site.  I’ll bet the Fitbit thinks I’ve climbed to the top of the Empire State Building by days end tomorrow!