Yesterday we went to The Kasha-Katuwe Tent Rocks National Monument. 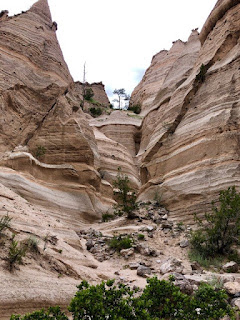 WOW!  It is an amazing place.  And, if you decide to visit – wear good walking shoes and bring water (there is none to be had once you enter the gates).  If it’s a sunny day, you might want a hat.  And, a camera because there are about a million picture opportunities!

Tent Rocks isn’t far from Albuquerque but you want to plan to get there early because in the summer, it fills up with visitors quickly.  And, they only allow so many people in the park at a time then, you just have to wait until some leave.

Kasha-Katuwe comes from the traditional Keresan language of the Cochiti Pueblo and means “white cliffs”.  The rock formations are the products of volcanic eruptions that occurred 7 million years ago.  They are made up of ‘tuff’ (a relatively soft, porous rock that is usually formed by the compaction and cementation of volcanic ash or dust) and pumice and a bunch of other things. 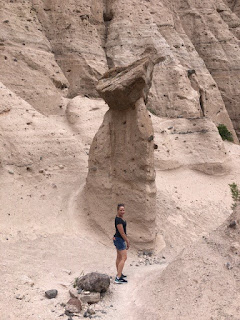 It’s on the Pajarito Plateau and ranges from 5,570 feet to 6,760 feet above sea level.  And for those of us that live in places where the highest “hill” is the freeway overpass, that’s waaaay up there!

We took the Tent Rocks Slot Canyon and Cave Loop (about 3.1 miles) which is rated as moderate.  Hahahahahahahahaha – moderate – giggle, giggle.  It’s a loop through a slot canyon with hoodoos (tent rock, fairy chimney, or earth pyramid) and striated rock formations.  And the climb is about 750 ft (seven HUNDRED and fifty) to the top.  And, the whole loop is uphill – even coming back, I swear it was uphill too!  And there are great big rocks you have to crawl over that get bigger on the “down” side. 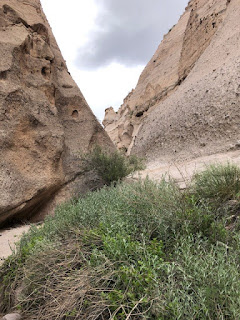 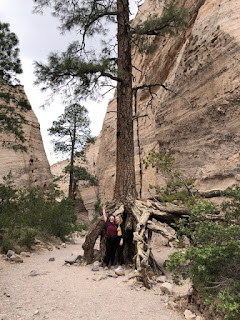 The grandgirls were standing
amongst the roots of that tree. 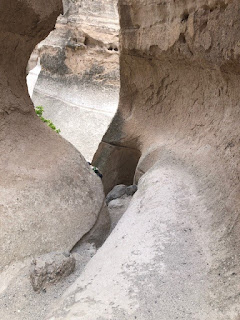 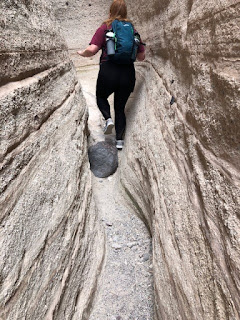 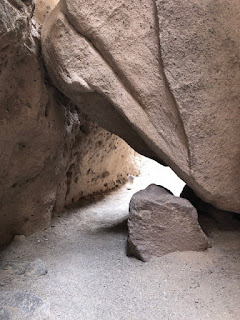 Yep – had to crawl under that 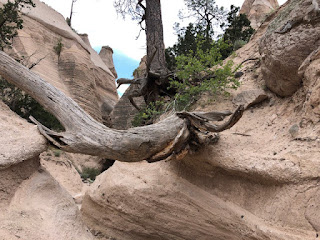 And this.  BTW – that’s not a fallen tree
it’s growing that way 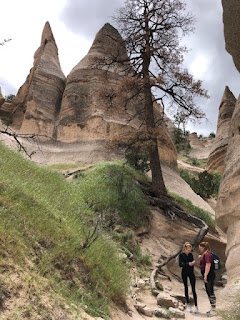 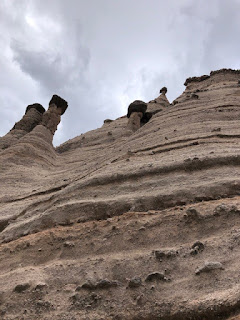 About 3/4th of the way up, the trail turned into a wash filled with very large rocks.  That would mean – spider crawling up to the top.  Hmmmmm – pass.  My oldest granddaughter took on the challenge and went all the way to the top 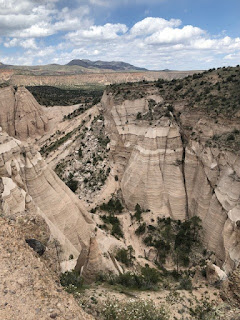 I do think I might need this tree in my yard.  Looks like an Ent sitting around keeping an eye on everyone. 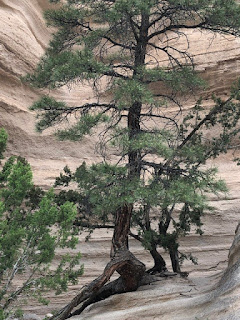