This past Sunday was the first cool AND sunny day since, maybe, September 22 (you know, the Autumnal Equinox).  I was outside early and worked for four straight hours doing general pickup - I have a yard of trash trees (aka Pecan Trees), mowing, and making potted plant decisions.  By the time I came in, every inch of me was tired.

The final plant to go from pot to ground is a Devils Trumpet.  It’s commonly known as Datura and should not be confused with Angels Trumpet (Brugmansia) which has pendulous flowers, rather than Datura’s upright ones. It’s also called Moonflowers, Jimsonweed, Devil's Weed, Hell's Bells, or Thorn Apple. 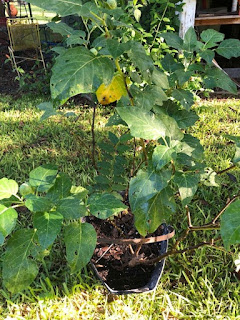 Last year I moved the large one and all its little brothers from the front yard to the back.  Found places for all but one which, in sheer desperation, I put into a container.  I find it very hard to throw away plants (honestly, I can just hear them screaming “no no helpme helpme”.  Problem was then, no place to plant it – pretty much same as now.  So, I finally did my “HA! there’s a space, dig a hole” thing and got it planted. 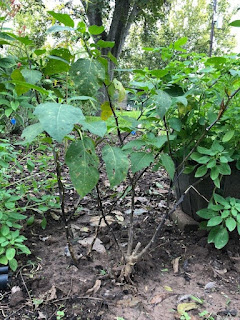 Datura is considered both an herbaceous perennial and an annual depending on where it’s grown.  Even here, it’s likely to freeze to the ground.  Mine ends a mild winter looking more dead than not with naked upright stems.  I always cut it to the ground, and so far, it has returned every year.  Datura plants average 2-4 feet tall (the Brugmansia or Angel Trumpet can become a massive woody tree). 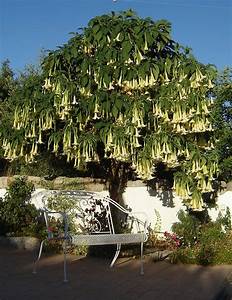 Datura stems are soft and erect.  Leaves are large and slightly furry.  And, every flower will make a seed pod.  It self-seeds vigorously and the seedlings mature quickly.  All the experts say plant it in full sun.  Mine have always been in part sun and do well.  Datura also likes a rich, well-draining soil.  It doesn’t handle drought conditions very well and would rather have regular watering. 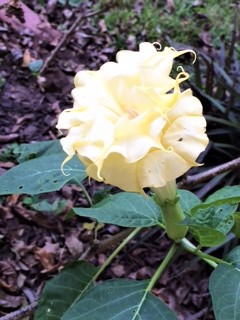 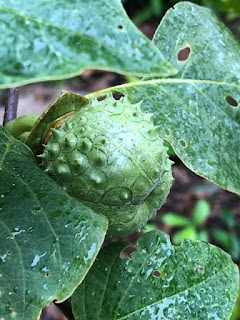 Flowers can be white, yellow (mine is a double yellow), purple, lavender and red.  Supposedly they are very fragrant at night but truth be told, I’ve never checked.  They will attract pollinators. 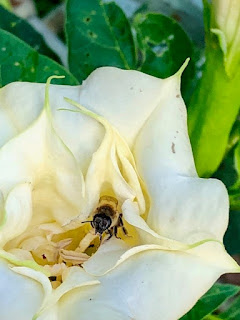 It’s an interesting, easy to grow plant that makes beautiful flowers.  Now, all that said, there are a few unpleasant things about Datura.  This plant contains potent alkaloids, including atropine, scopolamine, and hyoscyamine, and can be fatal if ingested.

Even so, in the long past days, Datura was used for treating asthma, depression, to induce sleep, and the oil made from seeds was used to regrow hair.  Finally, and, DO NOT TRY THIS AT HOME BOYS AND GIRLS, it was also thought to be a major ingredient in a witches flying ointment – an assortment of herbs including but not limited to - sium, acorus, cinquefoil, the blood of a bat, jimsonweed (there’s the Datura) and oil cooked to certain degrees and then smeared over the body.  Then, with certain incantations, the witch would fly. 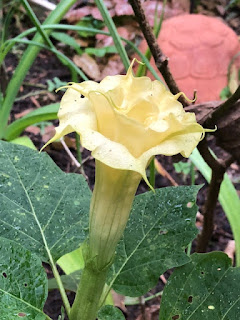