Adventuring – Wildflowers (and other Places)


I got a text from a friend the other day asking me if I recognized a specific wildflower.  Bitterweed.  No, where is it?  Show me.  So, yesterday we went wildflower adventuring.  Mostly I think of wildflowers blooming during the spring and very early summer.  There are, however, some that start blooming in early fall.  We saw fields and fields of yellow flowers and stopped and took pictures along the way. 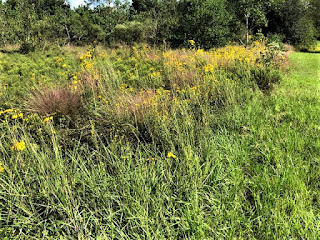 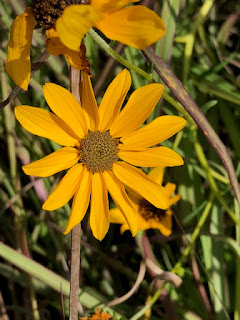 Maximilian sunflower is a perennial sunflower found from Manitoba to Texas.  They start blooming the first week of September and continue through early November.  It is a desirable range plant and is eaten by livestock. A heavy crop of seeds is produced, making it a valuable plant for wildlife. It was named for the naturalist Prince Maximilian of Wied-Neuwied, Germany, who led an expedition into the American West in the 1830s. 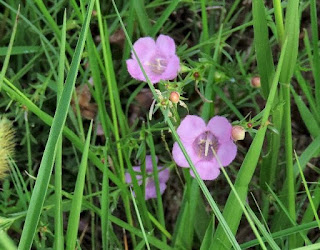 This one I hadn’t seen before and it took some serious searching to discover a name.  An annual member of the Figwort family, it has beautiful purple-pink bell shaped flowers.  It’s a major food source for sulpher and buckeye butterflies.  At one time, the root was harvested for the treatment of hemorrhoids. 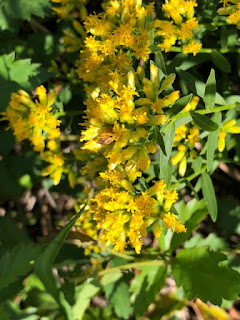 And, it could be either.  According to my wildflower book, the two are almost indistinguishable from one another.  Both are upright slender perennials.  Both bloom September to November.  Both attract bees and will grow in any soil; any sun.  FYI:  Goldenrod, however, has been used to reduce pain and swelling, to stop muscle spasms, to treat gout, joint, eczema, tuberculosis, diabetes, enlargement of the liver, hemorrhoids, internal bleeding, hay fever, asthma, and an enlarged prostate. 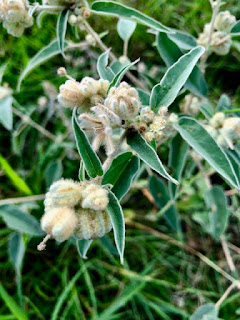 This is a range land, Texas native wildflower.  It produces seeds that are very valuable to dove, quail and other seed-eating birds.  You do not want to touch this plant as the tiny, dense hairs are easily shed when handled and can cause eye and skin irritation. And, other than that, it’s an invasive pest. 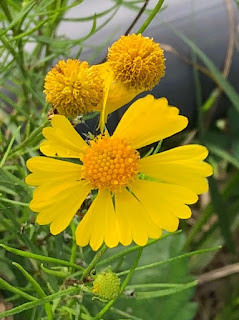 This is a native perennial found on the South Texas Plains.  The name Bitterweed is due to the bitter taste and bad odor caused by a resin like substance found on the plant.  It blooms June through October.  Also called Sneezeweed, the dried and powdered flowers were historically used as snuff.  Bees, wasps, butterflies, beetles, and other insects collect nectar and pollen from the flowers, but in the case of bees – honey produced tends to be bitter and unpalatable. 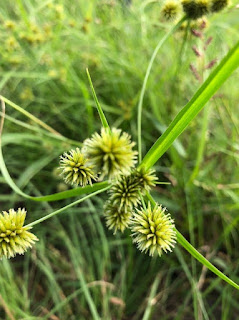 This is one of the largest family of plants with about 2000 different species.  Some good and desirable, some not so much.  And while they resemble grasses and rushes, they are not.  Some sedges are woven into mats and chair seats, and a few provide coarse hay. The pith of Cyperus papyrus was the source of the papyrus of ancient Egypt and other Mediterranean countries.  For the most part, this variety (Cyperus entrerianus, I think) is considered an invasive pest. 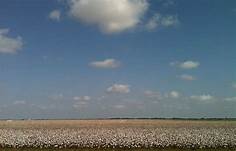 Now, I do realize this isn’t a wildflower but it is a growing thing and we saw a lot of cotton fields ready for harvest.  Texas ranks first in cotton production in the U.S.  It is the leading cash crop in the state, and is grown on 5 million acres.  Cotton is a member of the Mallow family – same as hibiscus, okra and hollyhocks.  Interesting.  So, I am a native Texas – have seen cotton growing from here to the panhandle all my life.  I know about the cotton gin and have a basic understanding of what ginning does.  I had not actually seen a working cotton gin and we stopped by one and watched for a few minutes.  Raw cotton goes in at one end and ginned cotton comes out in pallets at the other. 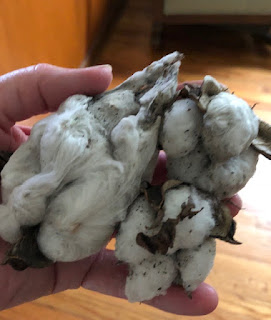 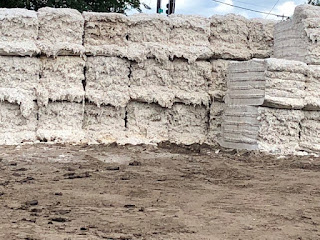 While we watched for a few minutes, a worker came over and gave me a handful of ginned cotton.  Soft.  Puffy.  Cool! 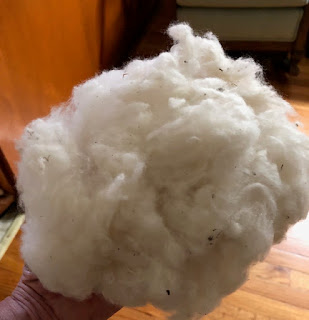