This year I want to plant Mugwort again.  It’s been years since I had any and it’s an unusual herb.  Honestly, it’s not a very pretty plant being a tall (3-6 feet) perennial.  The leaves are a gray-green and a little hairy on the underside. It has a strong aroma when the leaves are crushed and in late summer it will produce small yellow disk flowers clustered in long spikes at the top of the plant.  It grows best in a sunny spot with good draining.  It is likely to freeze and never return in other than temperate climates though you can water root cuttings, if necessary. 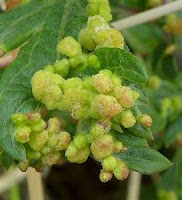 Common Mugwort is a member of Artemisia which belongs to the daisy family.  It’s found in many herb gardens although it is considered a weed by some.  It has a long history of use as a culinary and medicinal herb.  For instance, in the way-back days Mugwort was one of several herbs used to flavor beer (before the introduction of hops in the 12th century).  The leaves and buds were used as a bitter flavoring agent to season fat, meat, poultry and fish  And, it can be used to repel flies and moths in the garden.

But, mostly Mugwort is considered a magical herb.  Roman soldiers put Mugwort in their shoes to protect against fatigue and travelers carried it to keep them safe from the evil spirits and wild animals on the road.  Gathered at the right time of the year, it gives protection against disease and misfortune.  Some cultures rubbed the leaves on their body to keep ghosts away.  Grown around the home, it will keep evil spirits from entering.  Ya never know – can’t hurt. 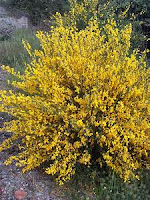 I’d also like to plant Broom.  Broom, native to Europe and Asia, is a member of the legume family.  It is a nitrogen-fixing plant, the flowers are fragrant, and it grows pretty much anywhere, all of which is good.  However, it is very invasive, as in considered a pest, invasive.  I’m not going to be planting this.  I have finally learned what I can and cannot control.  I cannot control extremely invasive plants.  (I have to remind myself of this often because the “but-it’s-pretty-I-can-control-it” thought overwhelms my common sense upon occasion.)

Another thing I’d like to plant is American Witch Hazel.  This is a 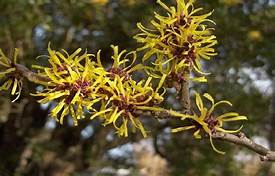 small understory tree or a huge, multi-stemmed shrub reaching heights of 20 feet and widths of 15 feet.  It is a beautiful and fragrant fall bloomer.  And, did you know – the forked limb of an American Witch Hazel was (maybe is) the choice of water dowsers.  Size aside, it needs a substantial number of 20°+ chill hours, something we don’t have here.  Another unusual plant to be admired elsewhere.

OK – so far – Mugwort is a go provided I can find some!