I’ve spent the past three days cooking.  Weird sounding, right?  After MHN died (and that’s been many years ago now), I discovered I had no idea how to cook for one person.  Of course, my brain wasn’t thinking completely coherently at that time which is probably the reason I resorted to frozen dinners – you know Stouffer’s and such.  After a couple of months, I discovered – they all taste the same- blech.  So, I invested in glass freezer dishes and started cooking meals for a family of four.  I usually fix four or five different meals, then, package them into single servings, label and pop them into the freezer.  This way, I have a variety of choices for several weeks.  Works for me.  The drawback is, as I grow older, standing for 4 or 5 hours a day during the cooking, cleaning up process is very hard on my feet, legs and back.  By the time I’m done, I’m done!

All that rather useless information is my excuse for being so quiet, again. 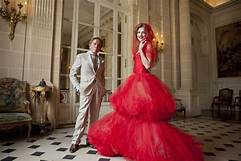 But I prefer to think it is the day to celebrate 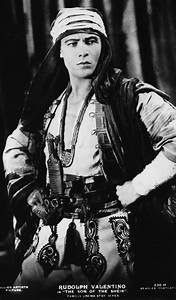 Rodolfo Alfonso Raffaello Pierre Filibert Guglielmi di Valentina d'Antonguella (May 6, 1895 – August 23, 1926), known professionally as Rudolph Valentino, was an Italian actor based in the United States.  He starred in several well-known silent films including The Four Horsemen of the Apocalypse, The Sheik, Blood and Sand, The Eagle, and The Son of the Sheik.

He's a hell of a lot prettier!

The Amazon rainforest is burning. Be afraid
The world is reacting in fear and outrage right now at the sight of what’s happening in the Amazon. NASA satellites show huge plumes of smoke drifting up from the burning forest; in Sao Paulo, the biggest city in the western hemisphere, night fell at 2 p.m. earlier this week when the smoke blotted out the sun.

Presiding over this debacle is the South American equivalent of Donald Trump, a blighted man named Jair Bolsonaro who won the presidency last year amidst rampant corruption and nationalism. He’s encouraged ranchers and loggers to “open up” the Amazon, and the flames are the natural result, as they burn the forest to create new pasture land for cattle or fields to grow soy. When challenged, he’s insisted that environmentalists must be setting the fires to make him look bad.  By BILL MCKIBBEN NEW YORK DAILY NEWS |AUG 22, 2019 | 9:14 PM

President Donald Trump promoted himself as "the King of Israel" and "Second Coming of God" this week, later calling himself "the chosen one"  — all in the same day. He also floated the idea of maybe, possibly, potentially buying Greenland? All that happened, America.  Josh Hafner  ,USA TODAY•August 23, 2019

is it time to vote yet?  and just where are the white-coated funny farm guys?  the inmates are running the world! 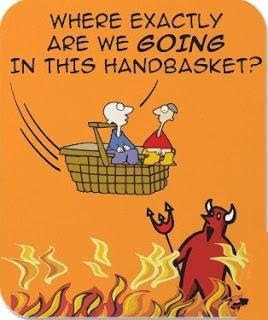 The weatherman is teasing us with the possibility of rain.  So far, any rain has stopped at El Campo or passed us by in favor of Houston.  So, I go out every morning and water the plants and tell them to just be patient, it will get cooler, we will have rain (someday).  And, while I’m out there, I look over all the potted plants to make sure they are looking, at least mostly ok, check for serious heat problems, move them to different locations, etc.  EVERY DAY.  So far, they’ve all looked, not exactly alright but not thinking of turning toes up any minute and NONE HAVE HAD ANY BUDS.  This morning I looked out my kitchen window and what did I see??? 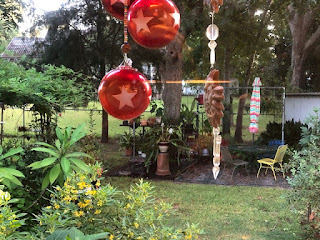 See that little white dot out there?

That’s my Night Blooming Cereus – with the little white dot.  I couldn’t believe what I was seeing.  Ran out and, yep! a beautiful fragrant bloom, still open in the morning!  On a plant that did not have any buds the day before.  Supreme weirdness going on. 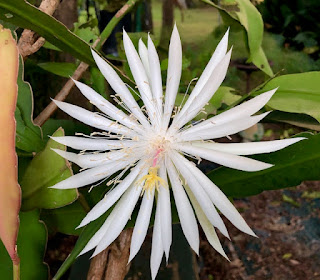 And other than the Katie Ruellia (aka: Dwarf Mexican Petunia), nothing much else is happening in the yard. 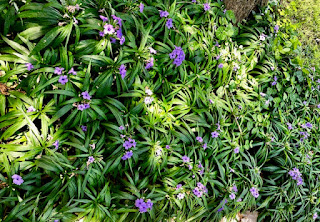 This is a good plant for those that like easy care and pretty blooms.  They are very adaptable and will tolerate wet and dry soils. They prefer full sun but will tolerate shade.  They can easily survive a light frost but will die back in a severe freeze.  However, come spring, they jump right up again.  They are disease and insect resistant.  And, they’re somewhat drought tolerant but will bloom best with regular watering.  One other thing – they’re really invasive so put them someplace they can have, forever because I'm pretty sure you can never get rid of them! 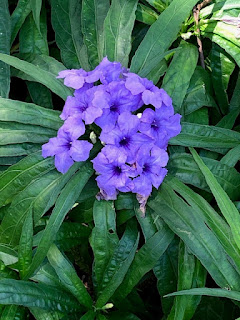