Many years ago (like back in the 1970’s), I read a trilogy – The Chronicles of Thomas Covenant, the Unbeliever by Stephen R. Donaldson.

Thomas Covenant, an embittered (and, from my memory, embittered is just not a strong enough word) and cynical writer, afflicted with leprosy and shunned by society, is fated to become the heroic savior of The Land, an alternate world. In the novels, he struggles against the satanic Lord Foul, "The Despiser", who intends to escape the bondage of the physical universe and wreak revenge upon his arch-enemy, "The Creator".  (He struggles with himself – a lot - and with everyone else it seemed to me.) 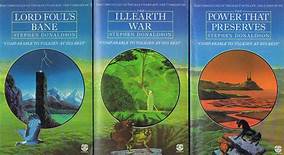 Donaldson did go on to write seven more Thomas Covenant books though I never read them.  I didn’t because the first three affected me so negatively.  It was hard to read doom and gloom on every page.  Possibly, if I reread them today, my older adult self wouldn’t be so affected …. possibly I would.

Yeah, yeah – so why mention it now, you ask.  Because I’ve just finished another trilogy that affected me similarly.  The Strain by Guillermo del Toro and Chuck Hogan.  I understand it’s also a TV series though I’ve not watched it.  I’ll say now, it was a hard three books for me to read.  About half way through the second book, I was ready for the story to be over. 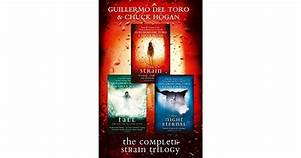 It’s about a virus.  A virus that comes to the US via an airplane landing at JFK … a plane stopped in the middle of the runway for no apparent reason, all lights off, all doors sealed, all window shades down. No one can be raised – not passengers, attendants or pilots.  The CDC is called in - a Dr. Ephraim Goodweather and his team of doctors and scientists trying to establish the cause and then, a cure for the virus.  By the second book, humans are no longer at the top of the food chain and finally know they are not the consumer, but the consumed.  Goodweather along with Nora Martinez, another surviving member of his original team, Professor Setrakian, a Nazi concentration camp survivor, Vasilly Fet, a killer of sorts, and several gang bangers form an alliance to try to survive and somehow overcome the infection.  By the third book, the world, as we know it, has ended.  Doom, gloom, defeat, no end in sight, enslavement, human cruelty to humans.  The actual ending surprised (maybe disappointed) me.  It will depend on your belief system as to how you might react.

Obviously these two trilogies have nothing in common except they are science fiction/fantasy.  But, both affected me similarly.  I am ready for light and fluffy now!

Yesterday was ESTATE SALE THURSDAY.  And, Ellen and I set off for one that had been described to me as the home of a “hoarder supreme”.  The house itself was really small.  It was overcrowded with a dozen people inside.  There really wasn’t very much variety in items.  There were … 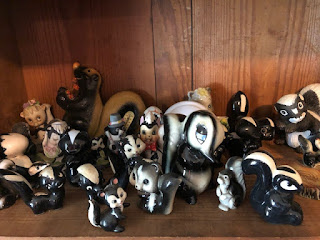 yepper doodle.  Skunks.  All types (including one with a Hitler head).  This is one shelf of a six-shelf bookcase.  All shelves were similarly stuffed with skunks.  Then, there was another pile of them in another room and still more in a glass fronted cabinet.

And, there was a whole room – a room with big, long tables and shelves – full of 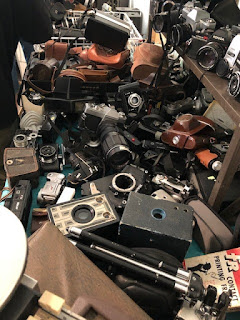 yep again, cameras and camera paraphernalia.  Prices were not outrageous ($20 - $30) but there was no guarantee any of them worked either.  And, they all required film of one sort or another.

Then there was, glassware – 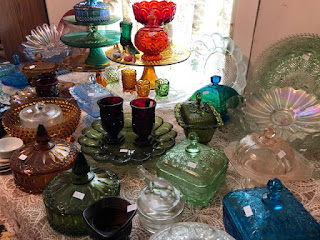 Finally, there were a slew of miniature metal things – like a coffee grinder and fan and phonograph and microscope and sewing machine 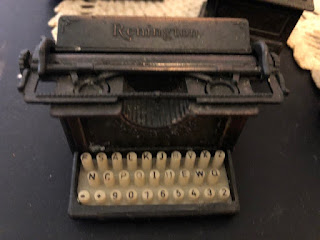 I was told a second one would be held next weekend because “the garage is filled to the ceiling”.  So, I’ll let you know.

A friend sent me this picture – look familiar, sez he. 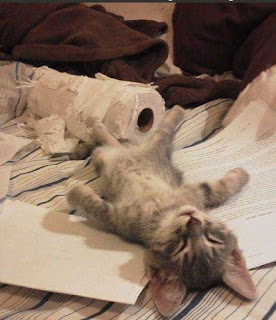 Ohmideargod, yes.  Could have been taken in my bathroom – a couple of times, except my paper shredders can unroll and spread out more t-paper.

Now long ago, while walking I spotted 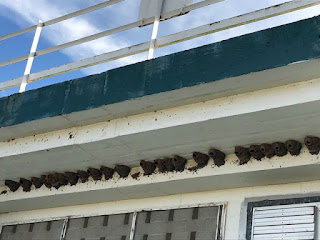 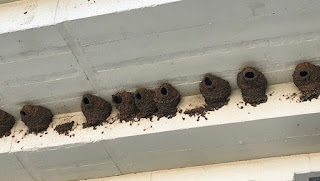 Barn Swallow nests.  Pretty cool, I thought.  However, next time I was there, they had all been knocked down and washed away.  Too bad.

Today is the birthday of Mirabeau Buonaparte Lamar, born in 1798; died in 1859; lawyer, politician, poet, diplomat, and soldier.  He was a private before the Battle of San Jacinto (deciding battle in the Texas Revolution).  He was a colonel when it ended.  Ten days later he was secretary of war.  A month later he was commander in chief or the army.  In five more months, he was the vice president and in less than two years, he was president of the Republic of Texas. 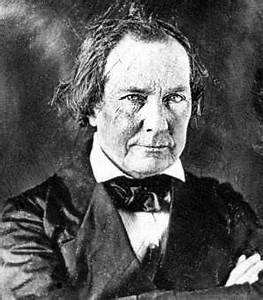 Beautiful in death
The soldier’s corpse appears,
Embalmed by fond affection’s breath
And bathed in his country’s tears.

Lo, the battle forms
Its terrible array,
Like clashing clouds in mountain storms
That thunder on their way.

It is the name of the high school in Houston I attended, (as did my sister and in 1939, my mother) which is why it caught my attention.

It is still hot outside.  The weatherperson teased us by saying we had a good chance of rain yesterday and today.  Ha!  Nada, not a drop, no dark clouds.  I may not have to mow again anytime soon as the grass is dying – fine, it comes back like all weeds.

I am dreaming of this 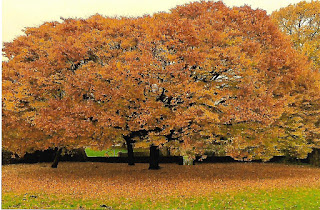 Autumn – Fall – Cool Days when you need a light jacket or sweater.  Of course the trees here never look like this but I did say I was dreaming.