Adventures in glass and Antiques, part 2


When we left the glass building, we walked over to Building C – the antiques building.  This wasn’t nearly as impressive and eye-wowing as the vintage glass with all its sparkle and color.  There were 20-odd vendors all pretty much local (as in greater Houston), well except for the one from Hattiesburg, MS.  Wasn’t any furniture – I can understand that – hard to transport.  I took pictures of some few items that caught my attention - some fairly common, some unusual, some just weird and some not really very old. 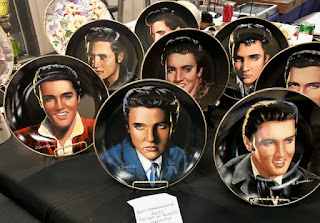 They’re probably from the early 1990’s – sorry, that doesn’t even rate as vintage.  Still, I guess Elvis would be considered vintage if he was still with us. 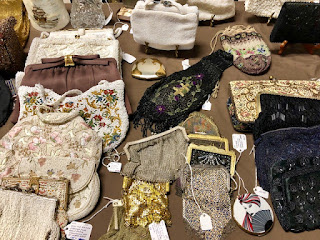 Beaded and Mesh evening bags.  Normally I like vintage beaded or mesh bags but I’d guess these are more modern than vintage – the ending edge of 1960 through the 1980’s although there were a couple of nice but plain Mandalian mesh bags.

A Sterling Automatic Adding Machine aka The 1950s Calculator.  Unusual. 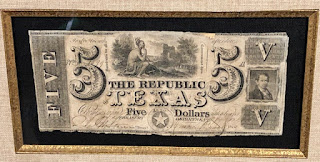 Have to say – I’ve never seen Texas money – a Texas redback.  So, just in case you want to know –

In the early days of Texas, a variety of currencies served as cash, including Spanish and Mexican money, bank notes from various U.S. states, and currency issued by private companies (call shinplasters). The Republic of Texas first issued paper money in 1837. This currency was called "star money" for the small star on the face of the bill. The star money was not face value currency, but rather interest-bearing notes (similar to a treasury bill) that circulated by being endorsed over to the next payee. In 1838, Texas issued change notes with elaborate designs on the front and blank backs.  The so-called Texas "redbacks" were issued in 1839. The government printed over two million dollars in redbacks, which were initially worth about 37 cents to a U.S. dollar. 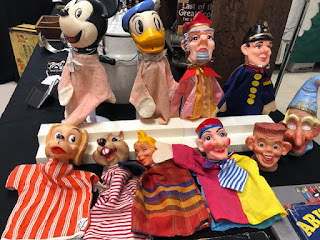 Very cute hand puppets.  They stirred up a memory – I’m thinking we had some similar to these when we were small children.  I’ll have to ask my sister. 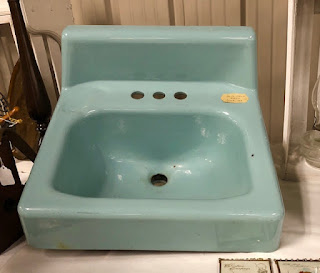 From a personal point of view, the antiques portion was disappointing though I will say that I tend to look at “antique shows” with a bit of a jaundiced eye.  (Comes from managing a local antique store for many years – a really, truly antique store – with antiques.)  I was surprised to find no vintage jewelry – lots of the cheap silver-like modern stuff but nothing like, say, this – 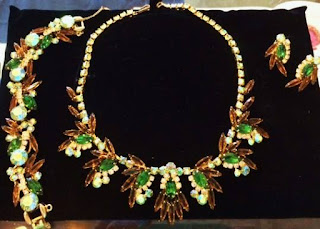 The prices on the things displayed were, I thought, high and I’d be surprised if any of the vendors made enough to cover their expenses.  I overheard one vendor commenting on the lack of attendance.  Yes, I suspect many shows and shops are experiencing that – antiques seem to have gone out of favor with coming generations.  I’ll never forget a conversation I had with a potential 40-ish customer some years back.

Sez she – Do you have any bookcases?  Rely I – yes (and showed her two - oak, cabinet style, circa 1890, with glass doors, about $500 each).  Whoa, sez she, this is expensive.  I just want something for my daughter to take to college.  For heavens sake, this is just used furniture.  Big sigh, yes, reply I, but it is furniture with a provenance.  Perhaps I can direct you to one of the resale shops.

Still, it was a very nice and enjoyable day out and afterward we went for lunch  to Another Time Soda Fountain where you can get shakes, malts, ice cream sodas, real fountain cokes, phosphates and the Blue Plate Special .
,
20 Aug 2019