This past weekend, my friend Bobby and I attended the 45th Annual Vintage Glass & Antique Show and Sale held by the Houston Glass Club.  It was held in Rosenberg at the fairgrounds in two large air-conditioned (thank god) buildings.

The goal of the club - To provide information on the history of the various patterns of collectible glass and pottery; exchange knowledge of glass; standardize nomenclature and methods for identification and aid in the preservation of glassware.

There were 30 dealers, some from as close as Houston and others as far as Minnesota.  And, they showed some of the prettiest depression era glass, EAPG (Early American Patterned Glass), American crystal, American dinnerware, kitchenware, and pottery I’ve seen.  And, boy-o-boy, these people know how to showcase their glass.  There was not one spec of dust on anything.  Lots of light made it all sparkle.  There was the usual and the unusual (and I had a hard time choosing which pictures to include, let me tell you!)

This was one of the prettiest displays with the pink, green and clear glass all intermingled together. 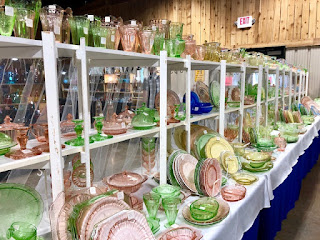 When I grow up, I want all my kitchenware and everyday dishes to be Jadeite.  It’s a pretty green milk glass that was popular in the 1930’s.  It was meant to be regular, utilitarian dishware for the everyday kitchen and you can find mixing bowls, cannisters, juicers and such along with plates, glasses, cups and so forth.  The green color was added to existing glass formulas in order to add a bit of color to people’s lives during the Depression.  It was American-made from one of three major companies: McKee, Jeannette, and Anchor Hocking.  I do have a few pieces of Anchor-Hocking I love. 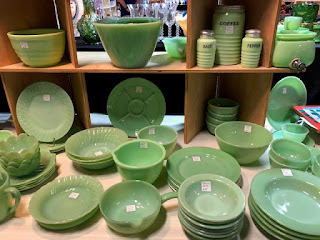 These were some of the prettiest pieces – 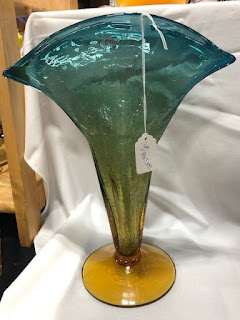 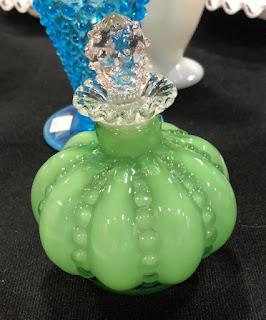 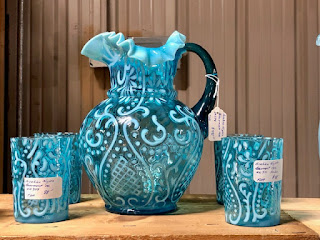 Can you guess what these are?  They’re Pickle Castors.  In Victorian days, Pickle Castors were a common table accessory.  Silver plated castors with glass inserts were used to display and serve small pickles and relishes. 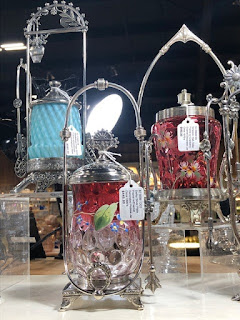 Carnival Glass is a molded or pressed glass with a luster that resembles the rainbow effect that you see when oil is poured on water.  The effect is achieved by spraying the hot surface of the glass with a metallic salt solution and then re-firing to set the iridescence.  It has been known by many other names in the past: aurora glass, dope glass, rainbow glass, taffeta glass, and 'poor man's Tiffany'.  Its current name was adopted in the late 1940’s from the fact that it was given as prizes at carnivals, fetes, and fairgrounds. 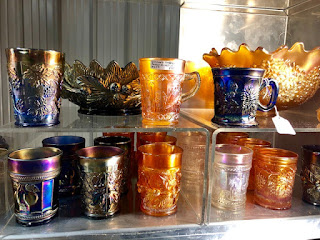 Then, there was the unusual

Nothing like seeing Pink Elephants before you start drinking! 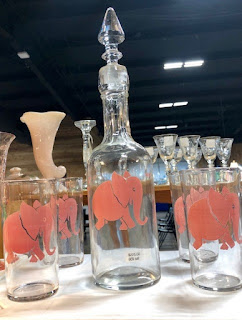 These are Cambridge Nude Stems. The Cambridge Glass Company in Cambridge Ohio made these nude stems, Statuesque, in early 1930.  All of the stemware featured the same girl in the same pose, with hair tossed to her right side.  Just a little kinky ….. 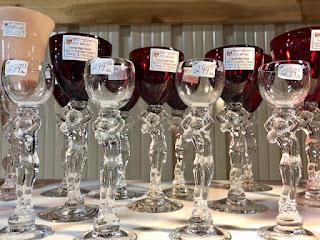 This is yellow Vaseline Glass.  Also known as uranium glass, Vaseline glass glows green under ultraviolet light, thanks to the uranium oxide added to the glass in its molten state.  In natural or indoor light, Vaseline glass has a yellow or yellow-green tinge with an oily sheen, which is where its name comes from.  Uranium oxide was first used as a coloring agent in the 1830s.  It was produced from the 1840s through World War I.  A variety of companies produced it, including Adams & Co., Steuben Glass, Cambridge Glass Co., and Baccarat, which released its first Vaseline glass piece in 1843 under the name “cristal dichroide.” 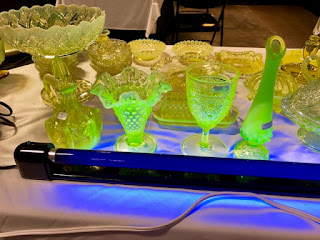 There really wasn’t a great deal of vintage pottery.  Some Roseville and Weller and I love the little elephant! 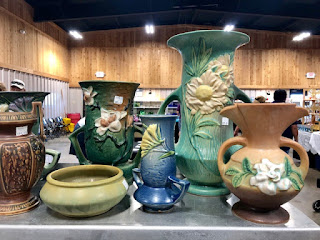 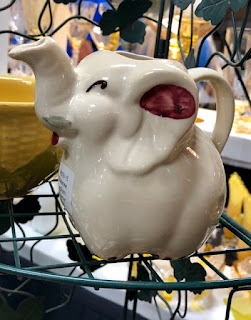 So, since I’ve already put up a bunch of pictures, I’ll wait until tomorrow for the antique show.