Ok, I worry about people sometimes.  I worry for the future of the universe, because people seem to . . .  uhmmm, not be getting smarter (trying really hard to not say dumber or stupid or complete idiots).

So, the other night, someone was mowing the field across the street, with a riding mower, in the dark, with a parked car’s headlights illumining the field, and with several young children playing chase around the riding mower.  Oh, and there is a huge flood drain in the middle of the field.  I was waiting for the mower to fall in and wind up in the river.  Really??

Today, while on the way to the library, I passed our local CVS.  Lots going on – huge fire engine, several police cars, couple sheriffs’ cars, driveways all blocked.  Checked the news then I got home.  Apparently, four individuals broke in to the CVS in the early morning hours.  Then, three of them got trapped in the store’s ceiling, I assume in an effort to 1. Escape or 2. Hide.  For a time, the police thought one suspect had managed to climb into one of the outside columns in an effort to hid. 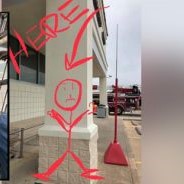 Though later it was determined that he also was hiding in the ceiling.  And again, really??

I generally look at the news feed in the mornings.  This mornings top stories –

I skipped the rest of the news and went right to my email and found 23 spams in the folder – nothing else, just spam.

I’ll tell you – handbasket, we’re all going to hell in a handbasket! 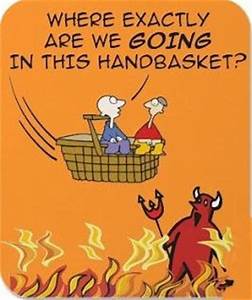 Ok, I’m going to retreat from this reality to see what Stephanie Plum is doing in the newest book.