Earth Day and Other Stuff


Yesterday was Earth Day – the time for people of our world to work together to solve climate change, end plastic pollution, protect endangered species and broaden, educate, and activate the environmental movement across the globe.  And, I hope someone in control of the universe is actually trying to accomplish all those things.  I hate to think what kind of world my great grandchildren will inherit, otherwise.

To celebrate Earth Day, I picked up all the trash others throw out their windows along my part of the street.  Grrrrrr – I do hope people that litter spend their after-life having to pick up trash 24/7.  I also walked my neighborhood to see what others have growing in their yards. 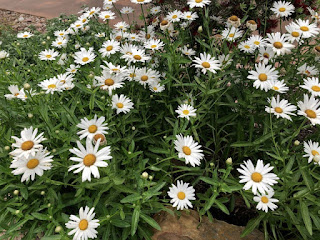 Spent some time working in my own yard – mostly doing small stuff – picking up all the sticks and branches the pecan trees throw down with every small puff of wind, small amounts of weeding, planting, repotting, and generally enjoying the outside. 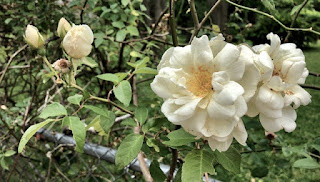 This year my passion vine is finally growing with vigor.  Last year it was still coming back from the GREAT FLOOD OF 2017.  I hope to have flowers this year.  And, I did find this fellow happily munching leaves. 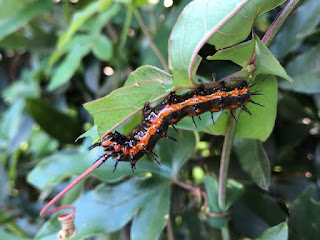 One day soon, this will be a Gulf Fritillary 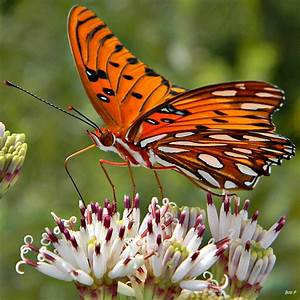 Last week was one of those difficult weeks that just make you tired, frustrated, prickly.  I got the 2nd pair of custom orthotics.  Long drive over to Victoria – “here you go and good bye” – long drive home.  Don’t help.  Actually, make the problem worse quicker.  Argh!  Had more than one testy phone conversation.  Double Argh!  My internet service is acting up.  Argh, Argh, Argh!!!  The wind blew – no gentle April breezes, no, no we’re talking about blow-over-everything-in-the-yard wind.  My windchimes about tied themselves into knots.  Just STOP – aarrrggghhh!!

Sunday, however, was nice.  My daughter came over from Katy and my two Texas grandchildren drove over from San Antonio.  My friend Bobby came in from Boling and we all had a nice lunch and chit-chat time.  Everyone got hit on the head with a Cascarone.  Good luck, you know.  I had confetti in my hair the rest of the day! 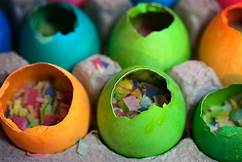 While rooting around in a closet, I found a Squirrel Feeder, Michael had made years ago.  I know, why would you want to feed them, pests that they are.  Normally, you’d put an ear of dry corn on the nail but I didn’t have any of that.  So, I tried an apple.  The squirrels ignored it for 2 days and then ….  Cool – maybe they’ll leave my birdfeeder alone! 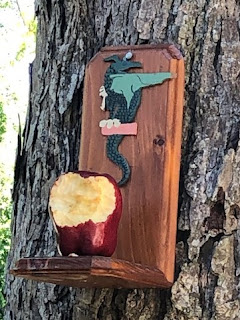 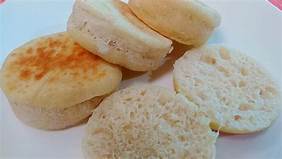 American muffins are baked breads in small tins while “English” Muffins are something else.  The batter is put into a ring mold resting on a griddle, allowed to rise, and then it is browned on one side, flipped over and cooked on the other.

If you order an English muffin in England, you’d probably get a funny look – order a crumpet – that’s a bit closer.

The bread we recognize as an English muffin is actually an American original.  Samuel Bath Thomas opened his bakery in New York in 1880 after perfecting the recipe.

While Thomas was the first to create the English muffin as we know it, the style of bread — a round, yeast-risen bread cooked in a ring mold on a griddle — dates back 1,000 years.