Note:  I actually wrote this yesterday but before I could post it, the threatening thunderstorm hit full force with loud booms, close by zots of lightening and flickering lights.  I turned off the computer.

Over the past three days, I got the back and front yard under control!  Well, sort of under control.  Ok, as much under control as is possible for a warm late February.

So, I
Mowed front and back
Cut back of all everything that either died back or had just gotten huge.
Dug up weeds in the yard.
Dug up weeds in the flower beds.
Moved half a dozen plants out of the shed and into the light.
Dug up and moved several plants that were in the really wrong place.
And, made at least 500 trips over to the yard trash pile. 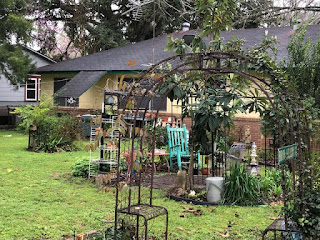 I know, in this case a picture is not worth
1000 words.  But it does look soooo much better than before.

Now, if the weeds would just not grow for a couple of weeks, all will be good with the world.  Of course, considering we are expecting mild temperatures and lots of rain, I’m thinking that might not happen.

I checked the weather off and on for the last couple of days.  Is it mostly safe to take plants out of the greenhouse??????  Many have been sitting in the very back where they get little light, not enough water, and were looking naked, shriveled, and generally sad.  They need to be out in what daylight we have (which is not much, mostly we have dark clouds).  Yes!, going to be in the 60-40’s.  So, I moved some of the plants outside.

I just looked at the weather again.  Next week it’s supposed to be down in the 30’s for FOUR NIGHTS!  Arrrggghhh!  Guess I’ll be moving them back in over the weekend.

I mentioned that I dug up and moved plants.  Yep.  Three years ago, I planted a tiny little lemongrass seedling.  Less than 6 inches tall.  Soooo cute.  And, by the end of that summer it was as tall as I am. 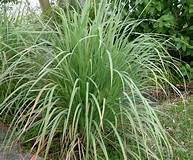 And, did I plant it someplace where it could just be big?  Oh hell no.  I planted it along the side of my herb bed where it over shadowed everything!  Arrgh!  Yes, I do I know better; I caution others to make sure there is enough grow space without crowding out other plants.  So, at the end of this past summer, I cut it back to the ground.  And, yesterday I dug it up and put it in a big pot. 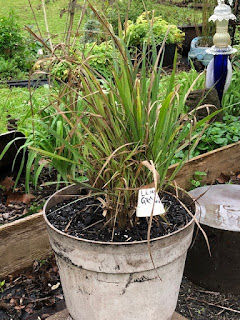 Hopefully – it will be better.  Though, I read recently that if you put it in a container, keep an eye on it because the roots can get big enough to burst it (oh goodie).

Lemongrass.  If you like using the herb lemongrass, you may find that it’s not usually available in your local grocery store.  If you’re not familiar with it, the herb lemongrass is a perennial grass that grows in tropical climates.  Yes, that means, north of Austin, it will likely freeze and die unless in a protected container of some sort.  The stalks grow in clusters and can reach anywhere between six to ten feet in height and probably about the same in width!  (A stalk of lemongrass consists of a base, a few tough green husks, and a white core, which is what is used in cooking).  And, it is easy to grow.  Keep in mind 6-10 feet tall and just about as wide when planting it.  If you choose to put it in some sort of container, get a big one!  Remember – bursting the container.

Lemongrass likes a well-drained soil in a sunny spot (yes, even our sun).  It’s not particularly drought tolerant though and will do best with regular watering.  Yes, cold sensitive.  Annual, biennial, perennial?  You know, I think it depends on where you live.  Mostly it’s described as an annual except for zones 9-10 where it’s considered perennial.  And, then I’ve read one article that describes it as a biennial.  Take your choice.  Does it bloom?  Well, mine never has and according to Texas A&M AgriLife Extension Service, no, not usually.

It is widely used as a culinary herb and medicinal herb. It has a subtle citrus flavor and can be dried or used fresh. It is commonly used in teas, soups, with poultry, fish, beef, and seafood.  It is high in vitamin A and C, folate, folic acid, magnesium, zinc, copper, iron, potassium, phosphorus, calcium, and manganese.  It has been used to help with digestion, relax muscles, relieve headaches, and help with joint pain relief.

Lemongrass oil is used as a pesticide and a preservative.  The oil has can be used to repel some insects, like mosquitoes (which is, as far as I am concerned, a good reason to plant it even if you never plan to use it as a medicinal/culinary herb).  Additionally, it is said to repel serpents, and is burned, bathed in, or carried on the person for honesty, growth, strength, psychic powers, and purification.  HEY! you never know what works!

OK what else is happening in my yard?  Not much yet. 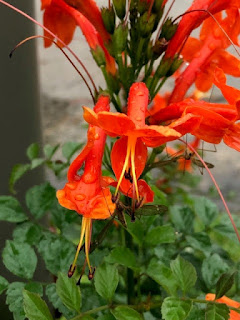 The Cape Honeysuckle is blooming. 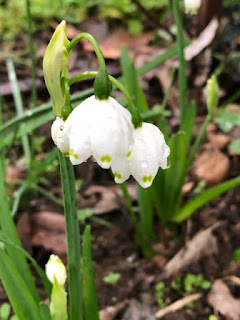 As well as the Snowdrops 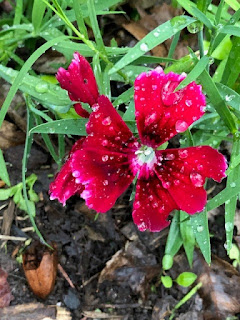 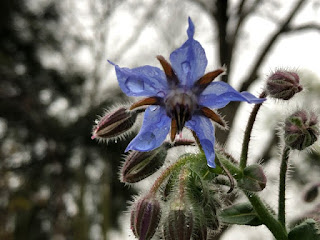 And the Borage is already up and blooming. These, but I can never remember what they are called. 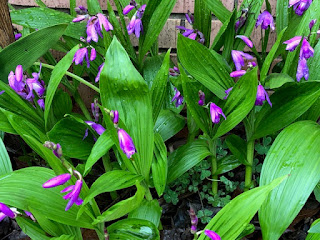 Whoa - more blooming than I thought!