It seems there has been a lot of that going on – Weirdness.  Just read the news feeds.  And, then there are these few things --

1 One of the things my sister and I do together is attend estate sales – I’ve mentioned that before.  We went to one this past Thursday.  It was located in Cat Spring, TX (“… a small community, big on family, food and friendships.”).

Myself – I’d never heard of Cat Spring but according to the info I had, it was only 35 miles north and west.

In case you want to know – Cat Spring was settled in the early 1800’s by German immigrants.  As of the last census, there is a population of 76.

I think it’s further because it took us an hour to get there via state highways, a tiny bit of I10, county roads which turned into a dirt road and ultimately a mud driveway.  It was one of the more unusual places I’ve been to and if I were to guess, I’d say originally it had been a working ranch (maybe still is).  First of all, the compound consisted of four very large metal buildings.  The first was a huge storage building with all sorts and sizes of tools.  Hmmm.  Interesting.  The second building was divided into two main areas.  One side was a storage (more tools, etc) area; the other a large square room with a very small kitchenette (it held exercise equipment, lots of exercise equipment).  There were a couple of “do not enter” doors that I assume were bathrooms and closets.  Double hmmm.  Building #3 was the largest and was one huge rectangle shaped room including a small kitchenette and the do-not-enter doors.  This was the weird part - Along one long wall were 6-foot bookcases (maybe 20+) and those bookcases held books – hardback books - all sorts of books – fiction, mysteries, romances, historical and self-help, training, textbooks and non-fiction of all sorts (like Billy Graham, Buddha, History of the Atom).  Then, there were five or so bookcases that held DVD’s.  All kinds of movies – action, adventure, drama, documentaries, comedies, scifi, war – all kinds.  The fourth building must have been the main house although it also only had one large square room with a kitchen (I don’t think there was a separate bedroom, though there was a small utility room, large bathroom and closet). 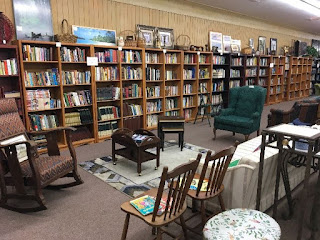 Very interesting place and if I think about it, it sort-of makes sense – the four buildings and all the books and movies.  The sale itself was not bad – some very nice things, some unusual things, and some “really-why?” things.

2 So, last night around 7pm, the temperature was hovering at 38°.  Then, when I went to bed around 10pm, I noticed the temperature had risen to 42°.  I know, not a big jump but as the night wore on, it got slightly warmer.  Weirdness.  There was nothing to make it warm up.  The wind had been and continued to blow about 15mph out of the north.

Then, when I got up this morning, according to weather.com, today . . .

Really?  You’d think the “Low” would be less the high.

February in Texas – you just never know how to dress in the morning! 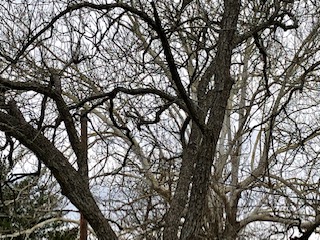 3 Honestly, I swear the past six weeks have been overcast and rainy almost non-stop.  We’ve had about 7 inches of rain since the first of the year.  That may not sound like much but when it’s not raining, it’s HUMID – like 75-80% humid.  That means – it’s really raining – the drops are just hovering in the air rather than falling into the rain gauge.  Nothing dries out!  Arrgh!  I know the sun hasn’t exploded or moved to another galaxy because I’ve seen it very briefly a few times.  I worry that if it doesn’t dry out a bit, the weeds will completely take over the yard and I’ll be lost in the spring weed forest.

4 My brother and family live in a small town in Washington state.  All things considered, winters aren’t so bad – rainy?, yes; chilly?, yes; bone-freezing snow and ice, not so much.  They are actually closer to Portland than, say, Seattle.  My niece posted this today.  (Weirdness is not limited to here.) 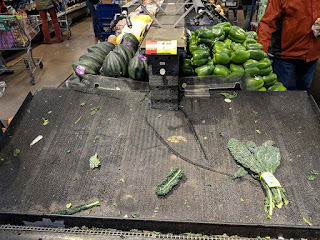 “Portlanders made a mad dash to their grocery stores in anticipation of the snow tonight. One of the first things to go was the kale.” Photo courtesy of Jesse Friedman

5 Last but not least, there’s this.