Because I’m a soapmaker and I generally collect all sorts of unusual facts,
Did You Know?
there are at least three native herbs that can produce saponins (a chemical compound found in some plant species that produces a soap-like foam).  Yep, three plants that can make a soapy substance used mostly (in past times) for cleaning and laundry.  You can use them on your own chubby little body but do a skin test first.  Wouldn’t want you to use one of these to wash all over then break out in hives from top of the head to tip of the toe. 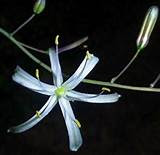 . . . is native to western North America, from Oregon to Baja California.  A member of the Lily family, it grows from a bulb that produces a grey-green wavy or toothed leaf and white, pink, or blue flowers.  The flowers bloom in early summer and oddly, don’t open until afternoon.  They grow best in full sun or light shade (and considering the part of the world they’re native to – here I’d say light shade).  They like fertile soil with good drainage.  It’s easiest to grow them from bulbs.  Like most – plant bulbs in the fall.  You can grow them from seed but according to what I’ve read, it’s a time intensive process that needs a lot of hands-on attention.  They prefer regular watering and benefit from a healthy mulch covering during the winter. 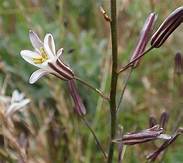 The two species used for their detergent properties by Native Americans and early settlers are C. pomeridianum (it is occasionally known as Wild Potato, even though it lacks any resemblance or relationship to the potato) and the C. angustifolium (a perennial wildflower also known as Narrow Leaf Soap plant).  The juices of the bulb contain the saponins making them useful as a kind of soapy scrubber.

Now, I’ve grown this one and the first thing I want to warn you about ---- it can be very invasive so keep that in mind if you decide to plant it.  Also known as Bouncing Bet (Crow Soap, Wild Sweet William, and Soapweed), this is an easy herb to grow.  It can get 1 to 3 feet high and since it cheerfully self-sows, it can be used as a ground cover.  Soapwort produces pale pink to white flowers from midsummer to fall.  Most pollinators are attracted to it.  You can start seeds inside during late winter or after the last frost, sow directly in the garden.  Germination takes about 3 weeks.  It does well in full sun to light shade and is happy in any type of soil as long as it is well draining.  My plants were on the southeast side of my greenhouse – it got a lot of morning and early afternoon sun but not so much of the really hot afternoon and evening sun. 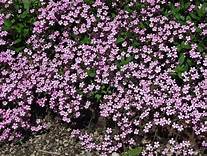 Now, it you want to make your own liquid soap – take 10-12 leafy stems and add to a pint of water.  Boil for 30 minutes, cool and strain.  The soap only keeps for a week or less so plan to make and use it.

Yucca is a genus of perennial shrubs and trees in the Agavoideae family.  There are something like 50 different species, all notable for their rosettes of evergreen, tough, sword-shaped leaves and large branches of white flowers. They are native to the hot and dry parts of the Americas and the Caribbean.

Some species have adapted to a wide variety of climates from mountains to coastal sand; grasslands to deserts.  Most species have thick, waxy skins to prevent loss of water through evaporation frequently store water in the thick roots.  Some store water in their fleshy leaves.  Some desert plants have an oily coating on their leaves or pads that traps moisture, thereby reducing water loss.  Some drop their leaves during drought to help control the loss of water.  Dead leaves of yucca collecting against the trunk of the trees help protect it from the sun.  And the channeled leaves of a yucca direct dew and rainfall water to their roots.  In general, a very versatile plant. 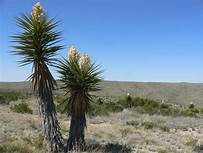 But we’re talking about the Soaptree Yucca.  The roots of this plant are high in saponins.  This is an evergreen, palm-like shrub or small tree that can grow 10 to 18 feet tall (which in my book does not make it a small anything).  The yellowish, leathery leaves have fine white threads along the edges and end in a sharp spine.  It’s native to the Americas, blooms from middle summer to early fall, and likes full sun and good drainage.  You can grow one from seed although be patient as germination can take anywhere from a month to a year.  It’s drought tolerant and when you do water – do so sparingly – enough to wet the roots, not enough to flood the plant.  And make sure you plant it some place safe – sharp leaves – dogs, cats, small children.  Oh, and it grows well as a container plant.

I suspect few people make soap from the Soaptree Yucca because it is really A LOT OF WORK.  First you need to dig up the Soaptree (no small thing by itself – big, heavy, lots of pointed sharp leaves).  Next, remove all lose dirt from the roots with a stiff brush and then, using a small hatchet, chop the roots into manageable pieces.  Cut off the hair-like extensions and the outer root covering, keeping the new exposed surfaces a clean as possible.  Whack the peeled pieces into small chunks and use a hammer (or a blender) to pulverize the pieces into a pulp.  When the mushy pulp has turned light amber, you can use it as a soap or shampoo.  It has a shelf life so it should be used, dried, or frozen.  Whew!