A couple of months ago, my sister wrote that she spent some time, at her home, removing all the window screens, cleaning them, washing windows, and putting everything back together.

It guilted me into knowing I need to do the same thing.  Now, washing windows fits right up there with vacuuming, mowing, and fixing car problems – not in my job description.  However, over the past many years, it appears my job description has changed so, after rechecking, I found Washing Windows on the list of responsibilities. Ick.

When I moved into my current house, the window screens were in poor to terrible shape.  I contacted a guy to fix the problem.  He picked up the old screens – good.  I had intended to wash all the outside windows before he got back with the new screens.  Good intentions; road to hell.  I swear, he picked up all the old screens on a Monday and by Tuesday afternoon they were rehung.  No, I didn’t get the windows done.  Sigh.

So, when I decided to start window cleaning, I was washing 7+ years of general dirt, spider webs, etc.  So far, I’ve gotten the three in the living room done – small start but starting is better than lamenting.  And, it took me longer than I would have thought to do just those three, since it involved moving furniture and then, half a dozen trips inside – outside – inside – outside.  And washing rags – you need a bunch of those since a good swipe removes the dirt onto the rag and if you're not careful, another swipe with the same rag, puts it right back (you can only turn it so often until the whole thing is really dirty - therefore, a bunch needed).  However, it’s well worth the effort. 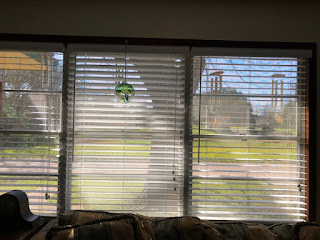 Next the windows in my office and dining room!!!!  Of course, today it’s rainy and the rain is supposed to continue through the next two days and then the temperature is going to drop into the very low 30’s.  Oh yes – I know, January, Winter is Coming. 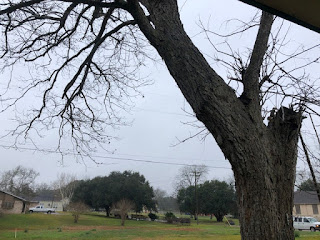 Window washing is on hold.  That’s okay – still have those good intentions!