The Wounded Seal
A Tale from Scotland

Long ago in Scotland there was a small fishing village that stood at the edge of the sea. Now in this village was a man who had made his living from the killing of seals and selling their skins in the market. His father and grandfather before him had done it and it was the only way that he knew how to make a living.

One day the Seal Hunter got into his small boat and rowed out from the rocky shores.  He rowed, and rowed until he came to the place where the seals were gathered. He put in his oars and let the boat drift. He watched as the seals swam, and played together.

Soon a large grey seal came up beside the boat. Quickly he stabbed his knife into the seal, and reached for his net. But before he could throw the net over the seal it swam away, with the Seal Hunter's knife still in its side.

The Seal Hunter fished for small fish that day, and then rowed home.  That night as he was eating his dinner there came a knock on the door.

There stood a woman who had come to his door on horseback. She was handsomely dressed, but her eyes were sad. "There is a rich man who would like to buy many seal skins from you," she said. "I will take you to him."  She beckoned for the Seal Hunter to jump up behind her on her horse and they rode like the wind.

Soon they came to the edge of the cliffs and they dismounted. The Seal Hunter looked around but he could not see anyone else there. He was about to ask where the rich man was, when the handsome woman took him by the hand and pulled him over the edge of the cliff. Down, down they fell through the air and then into the cold sea below.
They swam deeper and deeper and soon the Seal Hunter realized that he could breathe under water. In fact he saw that his body and that of his companion had become seal bodies.  They swam deeper and deeper under the water until they came to a cave opening in the side of the rock face. They swam into the cave. 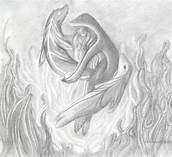 As they swam deeper and deeper in to the cave, the Seal Hunter realized that they were in a great seal compound, a place with halls and rooms where many seals lived. The halls were dimly lit, but he could see many seals watching them as they swam by. All of the seals looked very sad, and there was a gloomy feeling all around them.

Suddenly his companion stopped and showed the Seal Hunter a large fishing knife. "Is this yours?" she asked.  "Yes," said the Seal Hunter honestly. "I lost it today when I speared a large seal that swam away with it."

"That seal is my father," said the companion. "He now lies dying, and only you can save him."

They came at that point into a darkened room. In the center of the room on a flat rock was a large seal with a deep wound in his hindquarters. All around, seals stood, looking on sadly.

"Lay your hands upon the wound," instructed the companion.

The Seal Hunter felt afraid, but he swam forward and placed his hand over the wound of the seal. All the seals swam closer to watch him.  The Seal Hunter was surprised to feel a great surge of feelings coming from the seal when he placed his hand upon the wound.  They were feelings that he had never felt so strongly before. There was great pain, and sadness, and hopelessness, as if the world would never be right again.  But gradually the wound began to heal, and as it did the Seal Hunter began to feel peace spread through him, and then hope, and then the greatest joy.

Suddenly the large seal rose up as if he had never been injured. There was great rejoicing in the compound.

The Seal Hunter's companion took him by the arm and said to him, "I will take you home now, but first you must promise that you will never hunt seal again."

The man did not know how he would ever make a living, but he also knew that he could not hurt the seals again.

The two swam up out of the cave, and up, up through the cold green water to the surface, and then flew up, up through the air until they stood on the cliffs again.  They jumped on the horse's back and rode like the wind back to the man's home.

There he jumped down from the horse. As his companion turned to go, she thanked the Seal Hunter. He saw that her eyes were no longer sad. The man kept his word and he never hunted the seals again.