Another plant I brought with me from Arizona is Night Blooming Cereus, a cactus native to Arizona and the Sonora Desert.  I mention this because it has started to bloom.  And, it is, by far, one of the most beautiful, fragrant flowers I have in my yard.  The biggest drawback is --- it only blooms at night (yeah – I’m sure your figured that out from the name), the blooms only open between 8pm and very dark-thirty, and then they wilt, drop-off and are done.  You really have to pay attention or you’ll miss the show. 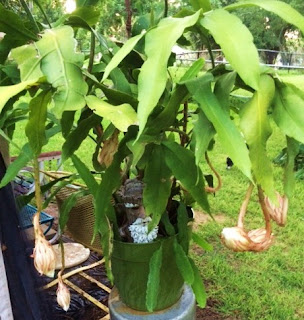 There are a couple other names for this plant - Queen of the Night, Princess of the Night, Lady of the Night.  And, the name, Night Blooming Cereus is a somewhat generic name in that it includes several different genera with the same characteristic of blooming at night.  Mostly though, they all look very similar.

I read that this particular cactus is grown as a houseplant – well, unless you live in AZ or TX (my part of TX, that is).  I’m not sure just how that would work or where it would fit indoors because this is a tall, twiggy, somewhat untidy plant.  The limbs can grow straight up or curve all over itself.  Plus, it could get to be as much as 10 feet in length.  I try to keep mine cut back to a manageable size because, although it lives outdoors from March to November, it does have to come inside during even our winter months.  In past lives, it has lived in a greenhouse but currently it winters over in the garage with a light and promises.  During the season, I grow mine in bright light – it gets the morning sun and is shaded during the hot afternoon.  Seems to do best for me that way.  Use a well-draining soil – I mix pea gravel in the soil and a little sand.  And, if you cut yours back – save the cut limbs.  Let them dry for a few days.  Dip them in root hormone and stick in a pot of dirt and, Eureka! you will have another cereus.  They root pretty easily.  The Cactus Guy tells me to fertilize them with a slow release fertilizer like Osmocote. 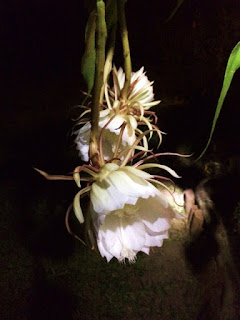 According to those “in the know” the plants usually don’t start blooming until they’re 5 years old (I always think that’s a +/- thing).  The blooms on mine start forming in late September on the end of a limb.  One expert said they put on buds when the nights cool down some.  But others indicate they can bloom all summer.  So, take your pick just be aware, buds form and grow very quickly.  They open and close also very quickly.  And, if, if, if, the planets are all in alignment, the universe is smiling, all is well with the world (or at least at your house) when the flower is open at night, it can be pollinated, and then it can (maybe) produce a fruit --- Dragon fruit.  I’m not sure if all species will fruit or only a specific one (or three) but mine have never produced anything other than beautiful flowers.  Still, DRAGON Fruit – I have to work on this……. 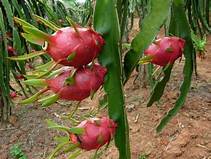 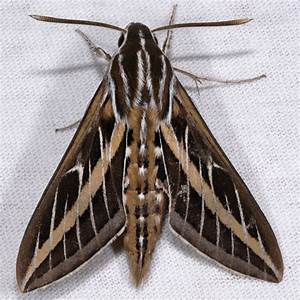 Sphinx moths resemble hummingbirds because of their body size and the way they feed. These moths act as pollinators for night blooming cereus and other types of succulents and cactuses. The moths are brown with a 2 1/2- to 31/2-inch wingspan. They feed on flower nectar with their proboscis, which is a beaklike, extendable tongue, or hollow tube.  Interesting 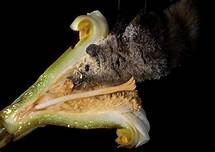 Nocturnal, nectar-feeding bats act as pollinator for night blooming cereus like the greater long-nosed bat, the Mexican long-tongued bat and pallid bat.  OK whatever gets the job done.

Hmmmm, what else????  Well there is a Cantonese soup made with the dried flower of the NB Cereus - lǎohuǒ tang.  The fruit produced is brightly colored and sweet to the taste.  The NB Cereus has a tuberous, turnip-like root which is said to be edible.  Good things to know, just in case …..

Still, it’s an easy plant to grow and usually pretty forgiving.  The first picture was taken in 2016.  Then, we experienced THE GREAT FLOOD OF 2017 and it sat under water for three days.  Big sigh.  Was not a happy plant.  But, with pruning, positive thinking and moderate threats, it has come back.