So many books, so little time.

I’ve never belonged to a Book Club – the kind where a group all read the same book and have discussions on the story as it unfolds.  Mostly because I don’t always like the reading list choices.  But, I have read several very good books lately so I thought I’d share.

This is the 5th Robert Langdon book - Harvard professor of symbology who, with the help of the beautiful Spanish Ambra Vidal, museum director of the Guggenheim, tries to not only solve the murder of rich and famous tech-guy, Edmond Kirsch, but also find out the amazing discovery made by Kirsch.  A discovery that would set the religious world on its ear.  It’s a good book.  Lots of action, several back-stories on characters bringing everyone together in one big finish, and well written although I thought it was very wordy.  Still, if you enjoy the Langdon books, this is a good one.

First of all, I like Michael Crichton’s work.  I’ve read a bunch of his books.  It was a sad thing when he died in 2008.  This is the 3rd book to be published since his death and my personal feeling is that it should have stayed in a file someplace.  I found it tiresome to read.  The book takes place in the late 1800’s and is about William Johnson, a rich, ne’er-do-well Yale student who, it seems, is going to college to drink, gamble, and do stupid things.  On the whim of a bet he heads off to the American West to catch up with paleontologist Othniel Marsh to hunt up dinosaur bones.  What he finds is hard work, outlaws, dust storms, prospectors that will shoot first and ask questions later, war with native tribes, and general chaos.  Along the way he goes from being a useless rich kid to a tough and experienced explorer.  I don’t like books I have the struggle to finish reading.  This was one of those for me.

Ilona Andrews is a wife/husband (Ilona and Andrew Gordon) writing team.  And, yes, the books border on being a bit romancey though not as much as the titles would lead you to believe.  Nevada Baylor is a private detective in a world similar to ours but different.  In her 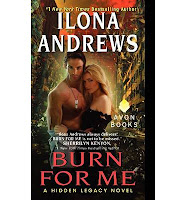 world, there are magic users with an array of powers specific to bloodlines.  These magic users are the Primes - they own wealthy corporations, run politics, and fight with one another.  The three books are funny, full of action and flashy magic, and enjoyable.  Titles are: Burn for Me, White Hot, and Wildfire.  Don’t let the titles or jacket art work put you off!

They have also written the Kate Daniel books, a series of really great books where the characters are demi-gods, shapeshifters, necromancers, vampires, magic users, warriors, and such.  You should try these also but read them in order.

One more light and very enjoyable …..

This is the most recent book in the Meg Langslow series.  Now – you should really start at the beginning of the series – Murder with Peacocks – because Meg, her family, and the town of Caerphilly, VA all move along in time.  Again, a very good bunch of books - light, funny mysteries.

Meg Langslow is working with her grandmother to open Biscuit Mountain Craft Center, a facility that offers week-long classes in everything from blacksmithing to oil painting.  A rash of vandalism is plaguing the craft center and it leads to a murder.  Meg is trying to track down the vandal and murderer in order to keep the craft center in business.

I’ve read several others in the past months but I’ll stop here for now.

PS I recently reread the first Pern books by Anne McCaffrey  – Dragonflight and DragonQuest, books I read back in the 1970’s.  Yep, still good.