So not so long ago, I had a really weird day.  Actually, it started in the very wee hours of the morning.

3:00am - I was awakened by a crashing sound.  Turned on the light and got out of bed to find a picture frame laying on the floor in front of my dresser.  It was the picture of my two daughters that sits on the back-left side of the dresser next to a picture of my son.  His picture was still in place.  The other one had “jumped” over a crystal ball, over the dresser to land, face down on the floor.  Glass didn’t break – no, just a corner of the wood frame.  Weird one.

Later in the AM – My day to dust.  So, I was moving my Royal Daulton figurines and suddenly, one of the ladies, just cracked and fell apart in my hands.  No, she hadn’t been dropped, had no existing cracks or chips.  Just plop!, three pieces in my hands as I moved her from a shelf to a table.  So, I figured I’d glue her back together.  As I stood there thinking about that, the three big pieces broke into several more smaller ones.  Sigh.  Weird two. 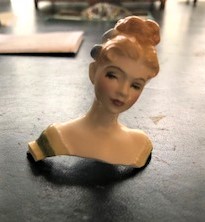 Early in the PM - I had a very nice clear glass teapot sitting on top of the refrigerator.  It was sitting well back from the edge and freezer door.  As I walked up to the fridgie, the teapot sort of jumped off, right on top of me.  But, it didn’t actually touch me at all – and it did shatter into a million pieces.  I'm still not sure if it shattered as it fell or hit the floor and shattered.  I just know not a single piece of glass touched me from hair to bare feet.  Ooookkkk.  Weird three. 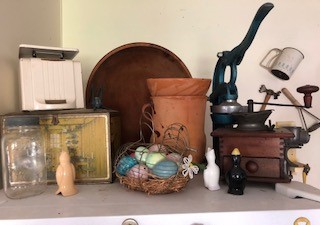 Teapot sat where sits the yellow pie bird.
though everything was pushed back a little further.

Late in the evening – I have a printer tray hanging on my wall.  It has a bunch of little oddities in it – shells, rocks, some printer type, tiny figurines, fishing hooks, my magic penny and an assortment of other stuff.  I was sitting in a chair across the room, reading, and suddenly – Ting!, one of the pieces of printer type fell (jumped?) out.  Alright, so there’s a buffet that sits just under the printer tray.  The type didn’t fall behind the buffet to the floor, didn’t fall on the buffet and then to the floor, landed on the floor close by my chair.  Weird four.  Time for bed. 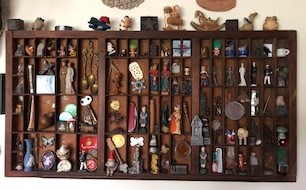 So, first of all, I am a firm believer in “odd things happen”.  But for those of you logical people …..  I cannot come up with a reasonable circumstance for the picture jumping over and onto the floor.  Skipping that one.  The figurine – I don’t know.  I’d had it 40-odd years and no problems.  Skipping that one too.  Teapot?  Well it’s possible it could have jiggled closer to the edge with the opening and closing of the fridge/freezer doors.  Although I hadn't actually touched the fridge when it jumped and strange that the mason jar standing next to it and a little closer to the edge has never moved.  Print “falling” from the printer tray.  Well, there is the argument that walking around the house might have moved the piece but it is one of the heavier square ones that hadn’t moved in the years previous nor since its flying leap.  It's wedged against three sides – flat on the bottom, flat against the back of the tray, flat against one side. 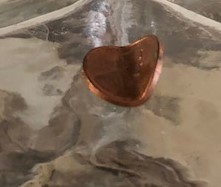