So, I have a little dog.  To be honest, I’ve never really thought of myself as a “dog-person”.  I don’t react well to dogs I don’t know.  Michael never met one he couldn’t charm into doggy grins and wagging tails.  Me, not so much.

However, thinking back, it seems I’ve always had dogs of one sort or another for all of my childhood and most of the time since I’ve been an adult. 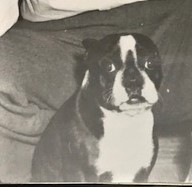 Tippy was out first dog from the time I was a very little person until I was 8 or so.  I have just fuzzy memories of him. 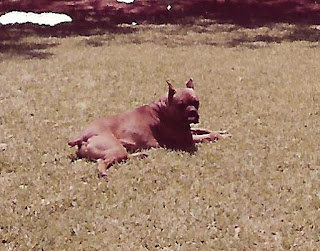 The first one I really remember was King (King Comus) – a boxer.  He was a lover of everyone and almost impossible to keep contained inside a fence.  He could literally climb the 6-foot chain link fencing that made up his dog run.  My father finally had to put a top on the pen.  And, when he was banished to his large fenced area, he would cry “maaaamaaaaa maaamaaaaa” until someone let him out.

Not being a dog person, when I married and had my first home, I was content with cats and then, children and cats.  When my girls were about 6-ish, my father gave them a puppy for Christmas.  Oh goodie.  And, Sherlock came into our family and fit in very well.  He loved the cats and kept an eye on everyone.  For all our pets, Sherlock was the least amount of trouble except he had to go to the groomer.  Honestly, he got his hair cut more often than I did! 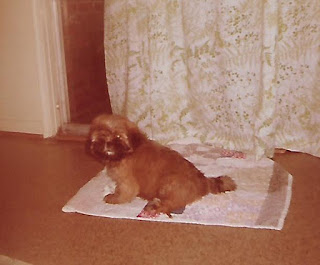 After Sherlock went to the summer lands, I was dogless again until I married Michael.  He came with an assortment of personal items, a few pictures, and a Siberian husky named Bandit.

Bandit was an unusual husky.  (1) he hated cold weather – drop below 70° and he wanted inside.  (2) he liked to sit on the roof of cars – not our cars – the neighbor’s cars.  (3) he was a lover and it wasn’t unusual for us to get 6am phone calls from people miles away asking us to please come get him as he’d been on their doorstep howling all night.  No, he wasn’t neutered and that’s a whole other story.  (4) honest-to-god, he oozed through the chain link fence to get out.  Our yard was fenced with 6-foot wood on the sides and 8-foot chain link across the back.  He didn’t dig, didn’t climb.  MHN finally decided he commando crawled under the chain link. 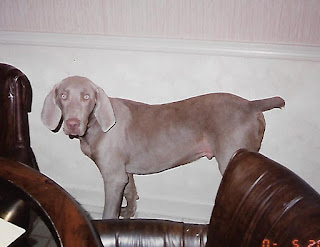 Next came Gus – Gustave van Strahan.  Gus was a beautiful Weimaraner.  We got him when he was 3 months old from a breeder who gave us a “deal” because the pup was the runt.  Gus was my dog.  He wanted to sit in my lap until he go too big and then he wanted me to sit on the floor so he could sit next to me with his head and as much else as possible in my lap.  He followed my every step.  He was not very adventurous.  Once, when we had gotten a new area rug for the living room, Gus refused to step on it.  He didn’t recognize it – wasn’t going near it.  He carefully inched around the rug to get to his bed.  I had to, literally, haul him, step-by-step onto the rug and sit with him for a while before he would walk on it.  Another time, when we were in Galveston at the house there, the next-door neighbor’s mini- dachshund came running over barking.  Gus, who had been raised by cats, took off howling down the street.  I had to take the little terror home and go sit in the middle of the street, calling him until Gus would come out.  Once he saw me, he ran over and sat in my lap, all 100-pounds of him.  Then, Gus had never seen stairs and was not interested in learning about them.  Of course, the house was up and so, I had to place his front feet on a step, then his back feet and pull, then front feet, back feet and pull.  We had to do the same thing going down.  But he was my puppy and when he went to the summer lands, it hurt my heart.  I never wanted another dog again. 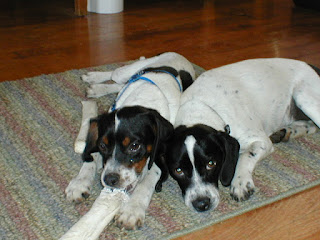