Moving from here to there without running screaming ..........


So, as I sit here in Wharton, I am giving serious thought to moving away – as in moving to another city all together.  It’s something I have to think about long and hard because I really don’t like to move.

DEFINATION:  MOVING  (mo͞o′vĭng) – The process wherein you pack up all your toys in boxes, trust them to a mysterious stranger, and move from the known universe to a place fraught with new and different and unusual people, rules and sights.

OK on my “HATE TO” list, add moving.  It’s up close to the top of the list, along with mowing and vacuuming and, oh yeah, buying a house and well, maybe buying a car.  All of those things raise my stress level to saturation. Where moving is concerned, I become overwhelmed standing in my home and thinking about having to take every single thing and prepare it for a box.

The first big move I experienced was in the early 1990’s when the powers-that-were within the company where I worked, decided all internal support personnel would be moved from the field office to corporate headquarters, which were in a whole other state.
Here are my notes from my first move …..

1992      OK, I’m a native Houstonian and a Texan of many generations.  Moving out of Texas for the first time ever, is kinda scary.  Plus we will be moving to a really different place – Boulder, CO.  I know – “just how different could it be.”  Well, for instance …  Houston is on the gulf coast – it’s serious flat-lander country.  Boulder is in the foothills of the Rocky Mountains - everything there is up.  Houston is almost a tropical climate.  It’s cold in Boulder, all the damn time, except for about 3 weeks in the summer when it is hotter than bloody-blue-hell and, oh yes, there’s no AC there.  Houston is a huge cosmopolitan city.  Boulder, not so much.  Houston has housing available out the whazoo and there were no houses for sale in Boulder – at least none that normal people can afford.  In Houston, commuting was a way of life – most people don’t think anything about a 45 minute commute to work.  In Boulder, people reconsidered jobs if they had to drive further than 15 minutes.  I’d always had access to the outside world via the Gulf of Mexico and now was going to be in a land-locked state.  That fanned up all my claustrophobia (yeah, yeah, sounds strange but it did.) And so on …... 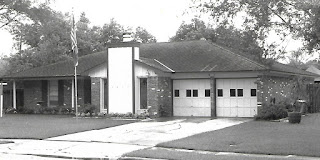 Now, you know there is a whole lot more to moving than packing boxes and hiring a moving company.  And, for that portion of the move, things were pretty easy.  This was a company paid move – the movers were to arrive on a certain day, pack everything up, load it into a truck and drive off into the sunset or whatever.

The real problem with this move was the prep work and the house we rented there was tiny and Michael would be dropping me at the rent house and flying back to Texas for another 6 weeks to finish a job.  The house had a large fenced yard and the owner would allow the animals.  Good, since we had a big dog and 3 cats.  There were a few problems, most notable, no heat on the second floor.  “Oh”, says the owner, “it’s no problem – heat rises – the heat from downstairs will keep the upstairs nice and warm.”  Lie, lie, lie, lie, lie.  Heat may rise, but I’m here to tell you it does not rise enough to keep a 2nd floor much above freezing.  Also, there were no closets - none - nada - zero.

So, I went through things and managed, after much effort and pain, to accumulate a small pile of “things to get rid of”.  I was proud of myself.  Then my oldest daughter came over.  She was not impressed. She decided we would clean out the attic together.  It was just awful.  If I couldn’t identify what was in a closed box and when I had last looked at whatever it was, then, it was trash.  I am just positive many treasures were lost that day.  But, we did get the attic pretty much cleaned out and a stack of “trash” by the curb that probably gave the garbage collectors nightmares.
We had the prerequisite “GARAGE SALE” extravaganza.  Once again – this was not a pleasant experience and I’m positive people left with things that I never wanted to sell.  But, all done, we were left with a somewhat manageable amount of stuff to move.
Tomorrow, Part Two of the move to another part of the Universe as I knew it.