and DUCKS, oh my! 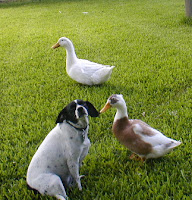 About a year after we got the first batch of chickens, Michael started telling me “Morgan needs a duck”.  No, sez I, Morgan does not need a duck, she has a brother and a bunch of chickens.  He then proceeded to wart me about “morgan-needs-a-duck” until it was get a damn duck or run screaming …….  Of course, we didn’t just get one duck.  Oh lord no – that would have been too easy.  We got two ducks.  MHN had hoped for a male and female but wound up with two drakes.  One was a Peking Duck named Ping; the other a Runner Duck named Suit.  The ducks and chickens might have shared the pen but Zeke, the rooster, was pretty ugly about the ducks amongst his girls.  Mostly the ducks wandered around the big fenced back yard.

Once again, the city person researched ducks.  Do you know how to tell a drake from a hen?  No, you don’t lift up the skirts and look under.  Drakes have a curled feather along their back, close to the tail feathers.  This was something both Ping and Suit had, so we figured they both were boys.  They got along well and only Suit got into trouble.

Now, my dogs have a dog door that goes from the inside to the outside.  It’s small, so I don’t worry about the local boogyman getting into the house.  One day I was in the kitchen and I heard the dog door click open/closed  open/closed.  Hmmm – open/ …..  Both dogs were in the living room, asleep on the sofa.  Hmmmm – I went and looked and Suit was wandering around in the back room.  The damn duck had figured out how to get into the house via the dog door.  Great.  We got Ping and Suit when they were just a bit older than ducklings.  And, as ducklings they would follow Morgan around the yard.  When they became adult ducks, they still followed her around, something she did not particularly like.  Evidently, Suit watched Morgan come in/out of the house and figured he could too.  It was a bit of a problem for a while.

Did I go, pick up Suit and take him outside.  Oh hell no – I’m the city person, remember.  Marched into the living room and told MHN one of HIS ducks was in the house and he need to get it right that minute and return it to the outside.  NOW.  Ultimately Ping and Suit got penned up – they had a large area and a big pond.  What more could a duck ask for.  Suit would fly over the fence and visit the chickens until Zeke chased him back out.

Over time, we acquired 2 more ducks and they all stayed with us 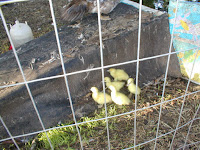 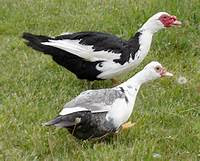 for about 3 years until they all left us one way or another.  We did have one hatching of many baby ducks.  Though, it was not a successful event.  I’ll never have ducks again in a back yard.  They are very messy (feathers everywhere), their pond had to be cleaned out regularly, and they have no qualms about flying away with a stranger.  And, our one female would hide her eggs until multiple little duckies appeared and we were not set up as a nursery.  Plus, they are not really built for defense.  The rooster had a sharp beak and very long sharp ankle spurs.  The ducks did not.  Unfortunately, our neighbor’s dog would wiggle under the fence and cause havoc with the ducks.  It didn’t end well.  I thank the gods Michael never wanted anything like a goat or horse or donkey because I would have had to sell him cheap. 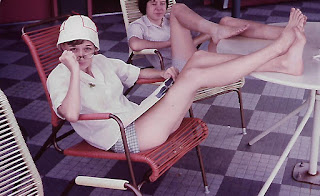