I know everybody has their own horror story about the process of flying from one place to another.  This is mine….

2003 - My mom, who had been living in Washington, died.  She wished to be cremated and have her ashes dispersed in the Gulf of Mexico.  This was not a problem as I live on the gulf coast.  However, transporting the ashes turned out to be a little more challenging. 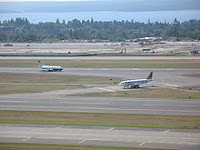 After all was settled and done, I left WA and flew to AZ where I had a stopover for a few days to take care of some business.  I had checked with my airline at Seatac and taking the ashes on board wasn’t going to be an issue.  Because I was also carrying back several personal items of Mothers, I packed one small suitcase very carefully and placed the box containing the ashes in it.  My plan was to walk that bag through the airport security and check it (it was very heavy) along my other luggage.  The ticket agent of my airline questioned if I really wanted to check the suitcase with the ashes (sometimes luggage is damaged, sometimes it is lost – yes I know but that’s the “what-if” game).  I confirmed that I did – had total faith that the suitcase would be there when I got there.  OK, she says and took me to the airport security.  I gave them the documents indicating what I was carrying and all was fine.  They put a special tagged lock on the suitcase and checked it through.  My suitcases and I all got to Sky Harbor in Phoenix – no problem.  However, leaving AZ for TX is when the problems started.

I got to Sky Harbor in plenty of time and waited in a mega line to get to the ticket agent to explain what I was carrying.  After many long minutes of step-push-drag, I got to the ticket person.  Told her

what was in my suitcase proffered all the documentation.  She just gave me my boarding pass and sent me to the airline’s security.  Now, this is not the terminal security just the airline's for getting the suitcases onto the airplane.  They tell me - nope, can't check the ashes through in a suitcase.  Well, says I, I did it from WA to AZ, same airline.  Well, says them, you can't do it from here to TX.  (Ya know, you just can't argue with those people.)  You have to carry it on-board, they say.  I told them, Fine, but I cannot lift this suitcase over my head into the bin.  First of all, I can't reach the damn bin and secondly the suitcase is VERY HEAVY.  So, says the security chief, what if you repack your suitcases so you can carry the urn.  Riiiiggghhhttttt - repack two suitcases here in the middle of Sky Harbor. No.   Well, she says, what if you just carry the urn.  Same problem – repacking the suitcases in the middle of Sky Harbor.  No plus I didn’t think the box, my carry-on and purse would fit in the little space under the seat in front of me.  There was some discussion about putting the box in the suitcase bin ….. No too big a chance of someone squashing the box with a big suitcase.  She finally suggested that the attendant will help me put the suitcase in the bin.  I must have had my "oh puleeezzzeee" face on because she says what’s wrong.  Not going to happen I tell her - they will not help me with the suitcase.  Oh sure they will, says she, blah, blah, blah.

OK, now here’s a quick flashback --- remember when I left WA, the TSA security put a plastic lock on the zippers of the suitcase carrying the ashes.  Tag says “TSA and a reference number”  I never took the lock off since I didn’t need to get into the suitcase in AZ.

While this security person is talking to me, she is tugging on that TSA lock (uh, don’t cut that off, I tell her) and takes a big pair of scissors and SNIP!, cuts the lock off.  Do you have another one of these, she asks.  No, TSA security in WA put it on.

Finally, she walked me to the gate to explain the situation. The good thing about this is that I got to use the employee line to check in through airport security, which was about 175 people shorter than the other one.  We got to the security table.  I proffer the documentation and tell them what is in the suitcase.  No problem, says they, we won’t open the suitcase and they didn’t.  We went to my gate.  The agent leaves me in the preboarding area and goes off to tell the gate agent the situation.  This is a kinda good thing – preboarding yea!  And, lo and behold, the plane was almost 2 hours late. It finally arrived and the airplane checkers, cleaners, and fixers decided something was wrong with it and they would have “to find” (and just what do you suppose that means – do you think they have extra’s just waiting around in a barn someplace??) another plane.  An hour and 20 minutes later and we were ready to board.  A new gate agent asks me why I’m in preboard.  I told her that I have to have help with the suitcase, getting it into the overhead bin.  Oh no, says she, our attendants won’t help you lift it into the bin.  Do you want me to check it for you???  Well, at this point I didn’t want to check it because I had absolutely no confidence in anyone there.  So, I tell her – you can’t check it.  Oh yes, she says, I can – I can check any bag.  I explained what was in the bag - No problem, she assures me, do you just not want to check it now because our people won’t help you.   By now, I’m either going to cry or start screaming.

Finally the original gate agent came up and told the new one what the deal was and no they couldn’t check it and yes, someone would have to help me.  The gate agent actually put the bag into the bin and assured me he would have someone waiting in TX at the gate to unload it for me and help me get everything to baggage and surprise of surprises - a very nice young man was waiting at the gate in Hobby to help me with the suitcase.  And, MHN was waiting for me at baggage.