I am not going to have any pecans this year. 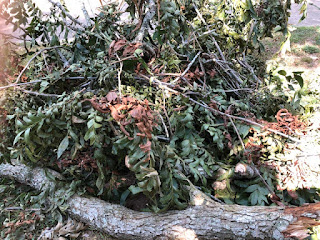 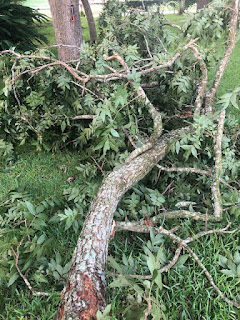 And two others  – all fallen in the past six weeks.  All loaded with green pecans.

Then, yesterday morning as I was sitting on the sofa waiting for a friend, there was a HUGE PHRUMPHBOOM and the whole house shook.  Both kitties flew down the hallway to hide someplace.  Scared the bejesus out of me and in the few instances between frightened and rational, I thought – WHAT? Sonic boom? Explosion? Then, I looked out the window to see branches hanging off the roof.  Went outside to see this 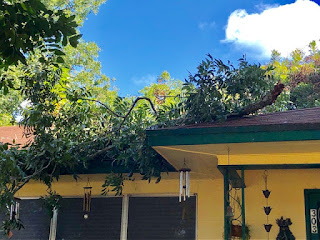 You know, I really don’t like pecan trees any more.  I’m not even sure I like pecans.

My friend helped me get it off the roof and over by the street.  I’d planned to get out early this morning and cut it up, but it started drizzling rain.  I checked the weather for Wharton – 80% chance of rain!  Wahoo!  Doing the ole happy dance here!

Nope – an hours worth of drizzle was all we got.  Didn’t even measure in my rain gauge.  Well poop!  Of course, by the time it stopped, the humidity set in and it was miserable outside so I’m putting cutting up the branch off until tomorrow or the next day or ....

Do you ever do something (for what must have seemed like a good reason) and then, later, have absolutely no idea why?  I do (more often than I’d like to admit).  Last year I bought six balls of lace weight alpaca/silk thread.  No idea what my original plan was.  Anyway, recently I dug it out and decided to crochet something.  Looked at patterns, tried out a few (rejected) and finally settled on a lacy shawl. 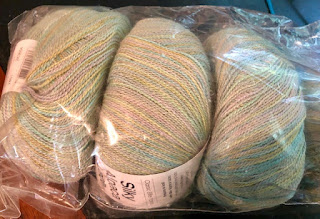 The pattern itself is very simple but it calls for a fairly large hook for this (and I hate to call it yarn) stuff.  And, it’s slippery – the thread yarn stuff.  I have to hold the hook and thread so tightly, my fingers ache after a time.  And, I’ve noticed when I tighten up my fingers, I also tighten up my mouth, shoulders, legs, and toes!  If isometric exercise is a real thing, then my muscles are all working against one another and it should count for a couple of extra hours of daily exercise! 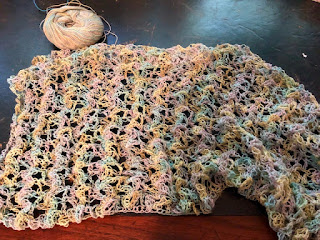 I figure I’ll get finished with this long about next June or August.

The Demon Duo have been very active lately.  Some days they pound up and down the hall, making flying leaps onto each other, me and other misc things.  Some days they spend a good portion of the day in the garage playing.  I went out last week to find them playing in the garage with . . . . something.  One would throw it up in the air and both would dive for it.  Looked like string or something similar.  Wasn’t. 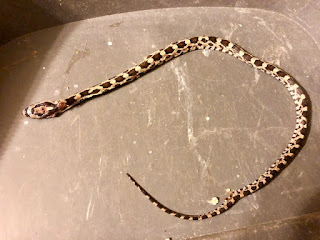 It’s a baby eastern rat snake.  I tossed it outside into the flowerbed.  My guess is that it squirmed under the man-door into the garage and the Demon Duo captured it. 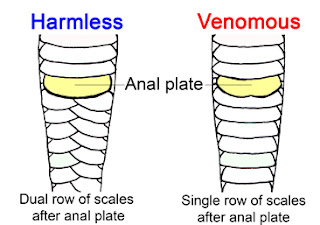 Of course the best thing is to just leave a snake alone – it’ll go on its way.  But it's smart to be familiar with the markings of venomous snakes in your area.  And, carry a big stick!

One more thing to share.  I recently read (well, it was an audio book, so listened to) a new book Hell's Aquarium (MEG #4) by Steve Alten

“The Philippine Sea Plate: The most unexplored realm on the planet. Hidden beneath its primordial crust lies the remains of the Panthalassa, an ocean that dates back 220 million years. Vast and isolated, the Panthalassa is inhabited by nightmarish sea creatures long believed extinct.  Tanaka Institute, Monterey, CA: Four years have passed since Angel, the 76-foot, 100,000 pound Megalodon, birthed a litter of pups far too numerous and aggressive to keep in one pen. Fortunately, a Dubai royal prince who is building the largest aquarium in the world seeks to purchase two of the "runts"―if Jonas Taylor's twenty-one year-old son, David, will be their handler. Jonas reluctantly agrees, and David is off to Dubai for the summer of his life, not realizing that he is being set up to lead an expedition that will hunt down and capture the most dangerous creatures ever to inhabit the Earth!”

Just a few comments.  When I started this book, I didn’t know if it was a standalone story or a continuing saga.  It is a continuing story but it does give enough background information that I felt comfortable with the storyline.  It’s rather Michael Crichton-ish in that I learned more about the prehistoric oceans and the creatures that inhabited it than I thought I’d ever need to know.  And, I suffered some serious claustrophobia during the parts that included tiny two person submarines in 36,000 feet of water.  Still, it’s a pretty good book and I enjoyed it well enough.