Storytelling - The Soldier and the Devil

The Soldier and the Devil. 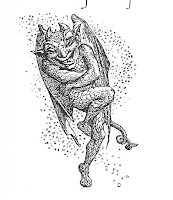 THE Devil encountered a soldier outside the town, and said to him, “Good friend, please help me to get through the town. I can’t go alone, though I should be very glad to do so, for the two-eyed dogs would surround me in every street. They attack me as soon as I enter the town.”
“I’d be glad to help you,” said the soldier, “but one can’t do any business without money.”
“What do you want then?” said the Devil.
“Not a great deal,” returned the soldier, “for you’ve plenty of money. If you’ll fill my gauntlet, I shall be quite satisfied.”
“I’ve as much as that in my pocket,” said the Devil, and filled the glove to the brim with gold coins.
The soldier reflected, and said, “I really don’t know where to put you. Wait just creep into my knapsack; you’ll be safer there than anywhere.”
“That’ll do! But your knapsack has three straps. Don’t buckle the third, or it might be bad for me.” The devil, you see, was afraid the buckled straps would form the pattern of the cross
“All right! Squeeze in.”  So the Devil crept into the knapsack.  But the soldier was one of those people who don’t keep their word as they ought. As soon as the devil was in the knapsack, he buckled all three straps tight, saying, “A soldier mustn’t go through the town with loose straps. Do you think that the corporal would excuse me on your account if he saw me so untidy?”
The soldier had a friend on the other side of the town who was a smith. He marched straight off to him with the Devil in his knapsack, and said, “Old friend, please beat my knapsack soft on your anvil. The corporal always scolds me because he says that my knapsack is as hard and angular as a dry shoe.”
“Pitch it on the anvil,” said the smith.  And he hammered away at the knapsack till the wool flew from the hide.  “Won’t that do?” asked he after a while.
“No,” said the soldier, “harder still.”   And again the blows hailed on the knapsack.
“That’s enough,” said the soldier at last. “I’ll come to you again, if it’s necessary.”
Then he took the knapsack on his shoulder, and went back to the town, where he pitched the Devil out of the knapsack in the middle of the street.  The dogs began to gather around.
The Devil was crushed as flat as a mushroom. He could hardly stand on his legs. It had never gone so ill with him before; but the soldier had money enough and to spare, and there was some left over for his heirs.
When the soldier died and arrived in the other world, he went to hell and knocked at the door.  The Devil peeped through the door to see who it was, and yelled out, “No, no, you scamp, you’re not wanted here; you may go wherever you like, but you won’t get in here.”
So the soldier went to the Old Gods, and told them how it had fared with him.
They replied, “Stay here now; there’s plenty of room for soldiers.”

Since that time the Devil has admitted no more soldiers into hell.