Indian Summer.  Part of my morning routine is to check the weather (always hoping for cooler days), however today’s check showed – no cooler temps in sight.  Ugh.  Summer still.

The other part of the weather I always check this time of the year is NOAA.  Habit from living in Galveston for a number of years where I checked it often during the day, May - November.  It’s hurricane season here.  And, even though I no longer live on the coast, I’m only 40-odd miles north so, I watch to see what’s happening.  We’re into the ‘Ds’ of storm names – Dorian right now looks to be heading for the southeast coast of Florida.  No worries here about any right now. 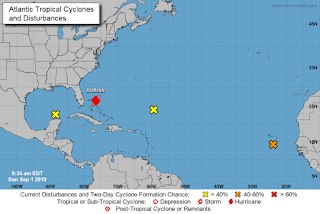 I am a Texan.  So much so, when asked by anyone from outside the US – “Where are you from”, I’ll always reply ‘Texas’ rather than ‘The US’.  I’ve lived here my entire life (well except for some years in AZ).  My first ancestors came here in the 1840’s.  I’ve always been proud to be from here.  However, these days I do not understand the state administration officials and their actions.  I don’t understand, I don’t agree, I don’t condone.

In the news today – the story started like this -

“Another mass shooting in America has left at least seven people dead. Two dozen more people were wounded in the rampage outside Odessa, Texas — the second mass shooting in the state in a month. The alleged gunman was killed by police, bringing the total death toll from the incident to eight.”

and ended with this -

On a more cheerful note – today I discovered that there is a really truly watermelon called Moon and Stars Watermelon.  How cool is that!  I thought it was just someone’s nickname for any watermelon with yellow spots.  And, pretty – aren’t they pretty. 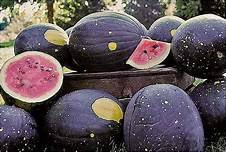 Moon and Stars is an heirloom variety.  It has skin that’s a dark green with yellow splots.  They’re big melons — ranging from 20 to as much as 50 pounds.  And, the fruit may be
round, oblong or pear-shaped.  Like all melons, it is an annual, needs space, sun, and a moderate amount of care (fertilizing, watching for bugs and such).

I continue to be amazed by my children.  My youngest daughter has recently taken up fishing.  As a child, she wasn’t interested in fishing – too boring.  Her job, when her sister fished, was to reach into the bait bucket for a shrimp and put it on the hook.  The other day she sent me this picture –
It’s a king mackerel.  Yesterday, she and her boyfriend came over for a visit and brought this – 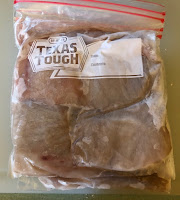 Well, it’s housework and laundry day and I can hear all my chores calling me.