You may remember that I lived in Tempe, AZ for 8 years.  It was nice.  It’s very dry there.  Dry and hot.  Gardening in the desert was really different and, it took me most of those eight years to change my mindset from tropical Houston to desert Phoenix.  When we moved back to Texas, I brought several AZ plants with me.  Sadly, most of them just didn’t care for the very humid, salty growing conditions and did not thrive.

However, a couple of things did survive and I’ve carried them with me from location to location. 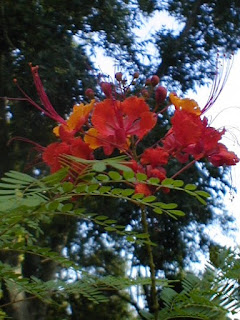 One is the Mexican Bird of Paradise.  This is an evergreen shrub that enjoys full sun and has bright flowers, yellow, orange and red, that grow on long, thin stalks. The leaves are ferny looking. The stalks are covered with soft green thorns.  It’s a fairly fast grower, and by that I mean - an established plant can go from a nicely shaped 4-foot shrub to something with long (very long – 8-feet plus) stalks, in a couple of weeks.  They don’t much like cold weather and will likely die but just cut back to the ground and come spring new growth will jump up.  The Mexican Bird of Paradise shrub will self-seed.  Honestly, I’ve had limited success growing one from seed but have, instead, dug up many of the babies that have seeded themselves. 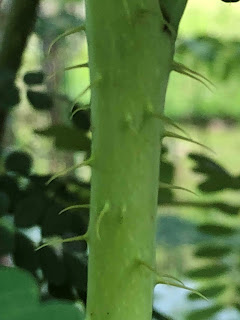 Growing them is really pretty easy because it’s hardy, low care, drought resistant, plus  it provides lovely color during the summer months that attract hummingbirds and butterflies. Plant it in a well-draining area in full sun.  Keep in mind it can get upwards of 8 to 15 feet tall.  When new, water it weekly.  Once established, you can pretty much ignore it.  Oh, and this is one of my plants that survived THE GREAT FLOOD OF 2017.  It did sit under two feet of water for three days, died back after the water drained away, and did nothing from last August until this past late April.  I really thought it had died and then it popped right up out of the ground!  Yea!

So, I had very little success transplanting the actual cacti I brought with me.  Between rain, humidity, salty air, and a whole bunch of buggy predators, most didn’t survive.  This little guy was the exception. 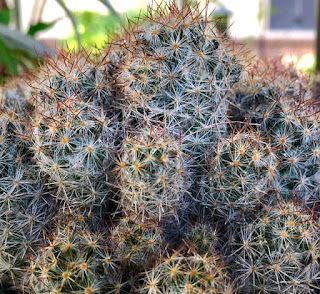 This one is a very small cactus and is covered with softish spines.  Yes, they will break off in your skin but they’re not as bad as some.  It’s lived in a pot since leaving AZ and mostly, I leave it alone.  It sort of grows on top of itself and can result in a mound that need to be pruned and repotted or the smaller ones begin to die.

In general, it can be watered often enough to keep the roots from drying out during the spring/summer months.  Mine lives outside in the summer and I’ll water it a little more often than once a week.  The pro’s say it can be planted in bright sun as long as you can avoid the hot mid-day sun.  I haven’t figured out just where that is, so mine pretty much stays in a pot where it gets morning sun and bright shade the rest of the day.  Come fall, the plant will go into a semi dormancy and watering should be reduced.   Then by November, water monthly until spring.   Mine blooms in the spring – April and May - and produces a fruit.  The flowers are very small and white – the fruit is a little smaller than a pencil eraser and red. 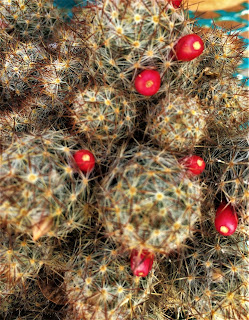 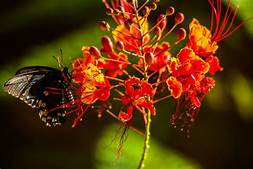