Recently, a friend who was visiting in Estes Park, posted a photo that reminded me of my visit to 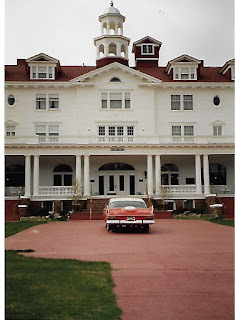 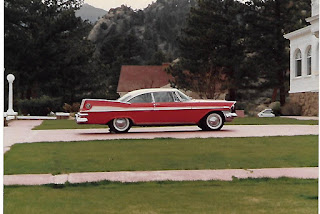 Christine was parked in front back then.

So just to give you some Did You Know??? stuff – The Stanley is located in Estes Park, Colorado.  Estes Park is a small town on the Front Range of the Rocky Mountains, about 1 ½ miles up.  The hotel itself was built in the 1909 as a summer resort for the rich and famous.  It once hosted guests like Molly Brown, John Philip Sousa, and Theodore Roosevelt. 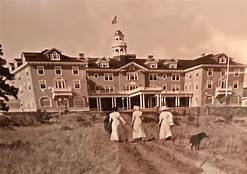 It was also an influencing factor for The Overlook Hotel in Stephen King’s book, “The Shining”.  (Personal note:  to this day, that is one of the scariest books I’ve ever read!)  It wasn’t the hotel actually used for the first movie (the one with Jack Nicholson) – that was the Timberline Lodge, Mount Hood, Oregon 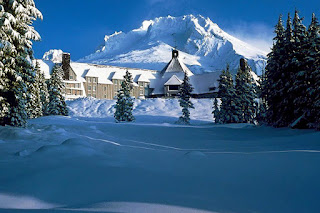 But it was the hotel used in the second adaptation of the book, The Shining (a TV ministry staring Steven Weber). 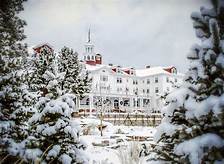 Michael and I vacationed in Colorado and stayed at The Stanley Hotel. 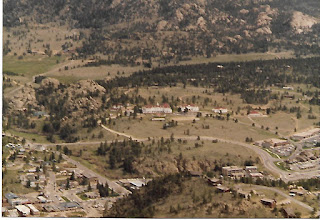 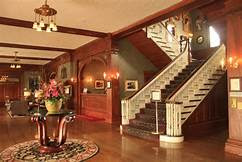 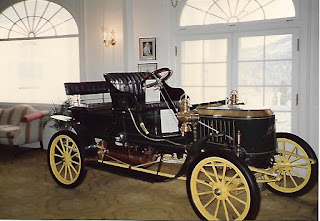 The Stanley Steamer parked in the Lobby

How cool was that!  (I have to say, the hotel has upgraded quite a bit because the rooms back then were not nearly so nice as they are today.)  Our room was on the second floor – square in shape with two double beds in an odd arrangement.  That is – one bed had its headboard on the west wall and the other had its headboard on the east wall; one was pushed up against the south wall and the other against the north wall.  OK weird but was what it was.  The real negative thing about that room was, although the view of the mountains was lovely, it was located just above the kitchen with the flat kitchen roof just a few feet below one of the windows.  The room was filled with not so pleasant cooking odors and it was hot (no AC in the rooms back then – it’s Colorado, in the mountains, in early May – not supposed to be hot).  It was hot in the room.

We had been out being tourists during the day so by the time we got to the room, it wasn’t pleasant.  Michael opened one of the windows.  No screens on the window.  Hmmm.  Checked with the front desk – ok to leave the window open a bit??? – Sure, it’s Colorado, chilly nights, no bugs.  Well, ok .

We went to bed, asleep, and then some time later, an odd sound woke me up.  I lay in bed listening for a while and finally decided the sound I was hearing was snuffling – like a big dog doing some serious sniffing.  So, I sat up and glanced over at the open window … and ….. something large and black slithered through the open window.

NOPE!  I DID NOT JUST SEE SOMETHING SLITHER THROUGH THE WINDOW INTO THE ROOM.

I was next to the wall, so I sat up a little more, leaned over sleeping MHN and saw a large-ish black something scurrying around on the floor between the two beds.  Now, in the span of several seconds I thought

I need to be calm.

I need to wake up Michael.

I need to turn on the light.

And, simultaneously, I turned on the light and shrieked – MICHAEL, THERE’S SOMETHING IN THE ROOM!

Perhaps not so calm but I did get the light on and wake up Michael.  He hit the floor with fists up and encountered ---- a raccoon, which he chased around the room and ultimately out the window.  Slam – down went the window.  Hot room.

OK, he sez, I’m going downstairs to talk to the night manager.  And, leave me in the room with raccoons knocking at the window.  I’ll come with you.  Down we went.  Now the night manager was really an unpleasant, rude, annoying little woman.  MHN explained, very calmly, what had happened.  She followed us back to our room (although why I cannot tell you).  Her first comment was – well did you do something to entice the raccoon into the room?  (REALLY?????).  Did you have food in the room?  Well, yes, I replied, we have a bag of cookies (2 – two – 2 only).  Well, she said, - there you go COOKIES!  I lost it.  And, while I didn’t call her any bad names I did tell her that (1) if food is not allowed in the rooms, they need to hang up a big sign; (2) that room was unreasonably hot because of it’s location above the kitchen; (3) we asked about leaving a window open because of the hot, smelly room and nobody said fine but beware of raccoons; and (4) I wanted another room – right that minute or things would get really ugly.  Well, she could give us the room right across the hall.  Same problems.  Nope, I want a room with no access to the windows, a room that is cooler, and a room that does not smell like old food.  We were moved to one of the tower rooms.

The next morning MHN was ready before me and said he’d meet me in the restaurant.  He got down to the lobby and the hotel manager came up to him to apologize for the nights happenings.  He looked at the guy, smiled and told him – My wife is right behind me and she’ll want to talk to you and I’m gonna sit right over there.  The manager and I had a conversation that at least made me happy.

That evening, as we came down from the tower room, we stopped on the landing and looked out onto the flat roof of the kitchen to this this little guy. 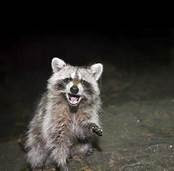 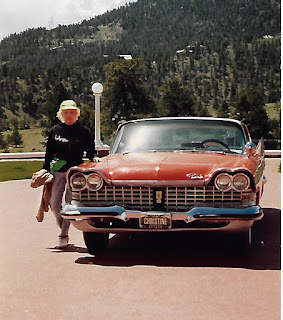