Spring being a tough act to follow, God created June.

OK, time to mark your calendar with June’s special days ---

Adopt-A-Cat Month  American Humane celebrates Adopt-A-Cat Month® each June – a month that also marks the height of “kitten season,” when millions of kittens are born and often end up in animal shelters.  And, as it turns out --- I have kittens that will soon need a forever home.  Our neighborhood is overrun with feral cats and in the last 10 days or so, one has had kittens in my shed.  She seldom leaves her babies but I’ve managed to get to them once or twice.  There are 4 and they are very cute. 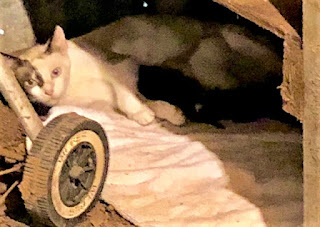 Beautiful in Your Skin Month  It’s the largest organ of your body and perhaps it is the most wonderful as well. Your skin covers your entire body and acts as a shield from the elements, it bends with ease, warns you when something is too hot or too cold, repairs itself when broken, and plays a huge part in your appearance. There is a lot that contributes to having healthy skin but feeling beautiful in your skin is more of a reflection of the mind than the mirror.  So, take care if your skin!

National Oceans Month  Covering 71 percent of the Earth’s surface, the oceans affect everyone from their climate and weather to their food and agriculture. Get involved with National Oceans Month to raise awareness and preserve the beauty of Earth’s aquatic environment. 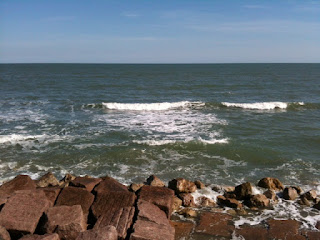 World Naked Bike Ride Month (Northern Hemisphere)  This is an international clothing-optional bike ride in which participants plan, meet and ride together en masse on human-powered transport (the vast majority on bicycles, but some on skateboards and inline skates), to "deliver a vision of a cleaner, safer, body-positive world."

International Clothesline Week: 2-9  Was created to encourage people to save energy by hanging their clothes to dry instead of using electricity or gas.

Watermelon Seed Spitting Week: 24-30 Select a large, heavy seed. Center the seed on your tongue. Roll your tongue to make a barrel for your seed bullet. Inhale deeply through the nose (no one wants to perform the Heimlich). Lean back to achieve maximum force for propelling the seed. Abandoning all decorum, quickly expel your gathered breath through your rolled tongue.

Yell "Fudge" at the Cobras in North America Day: 2   Anywhere north of the Panama Canal. In order to keep poisonous cobra snakes out of North America, all citizens are asked to go outdoors at noon local time and yell “fudge!” Fudge makes cobras gag, and the mere mention of it makes them skeedaddle.

Wonder Woman Day: 3  “At last, in a world torn by the hatred and wars of men, appears a woman to whom the problems and feats of men are mere child's play. A woman whose identity is known to none, but whose sensational feats are outstanding in a fast-moving world. With a hundred times the agility and strength of our best male athletes and strongest wrestlers, she appears as though from nowhere to avenge an injustice or right a wrong! As lovely as Aphrodite- as wise as Athena- with the speed of mercury and the strength of Hercules - She is known only as Wonder Woman, but who she is, or whence she came from, nobody knows!” 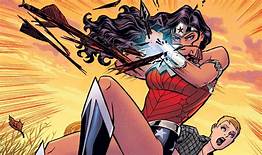 International Bath Day: 14  Legend has it that on June 14th (around 260 BC) Greek mathematician, scientist and scholar, Archimedes, discovered while taking a bath that an object’s volume could be accurately measured by being submerged in water! Unable to contain his excitement over this discovery, Archimedes lept out of the bathtub and yelling “Eureka, Eureka!” as he ran through the streets of Syracuse, Greece. 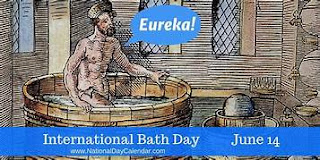 Litha: 21  or Midsummer is a celebration of the Summer Solstice by the lighting of bonfires in honor of the sun which is at its strongest point.

International Fairy Day: 24  a day for fairy believers young and old to celebrate the stories, magic, and history of the Fair Folk.  "She's going to die unless we do something. Clap your hands! Clap your hands and say, 'I believe in fairies!'"   Peter Pan, JM Barrie.  Are you clapping your hands now???
Take care 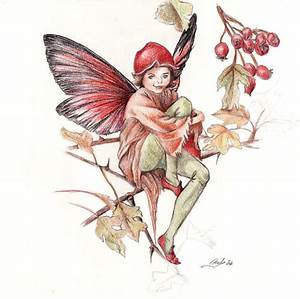