I have an ongoing project.  Somehow, I’ve acquired a variety of letters and I’ve been transcribing them.  Partly because they’re part of my family history.  Partly because I am fearful the paper letters will be destroyed or damaged or lost.  And, partly because they show us a different time and place and thought process and person.

Letters written (1908) to and from my great aunt and uncle.  My Great Uncle T (Terrell) wrote love letters to my Great Aunt K (Callie) before they were married.  He worked for the railroad and was some distance from her.  They were sweet, tender letters telling her how much he cared and missed her.
“Sweetheart I wish I could tell you just how dearly I love you but I caint.  I will just say that you are the dearest one on earth to me and I am only waiting for the time to come where I can take you in my armes and call you my one dear sweet wife my life long companion.” 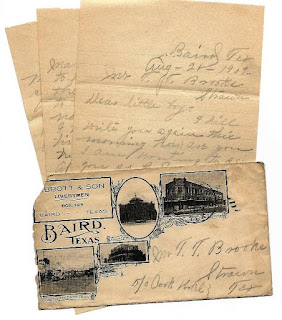 Her letters back were full of concern and insecurity.
“You are so good & generous.  I know you will spoil me.  I don’t know how it is Dear that you can love so well a little old whimsical bony ugly girl like me but you said for me to please not grumble at myself.  I wont no more but you know I don’t wont to deceive you dear & I think I have got the best sweetheart in the whole world.”

Letters written (1939-1950) to my Mother by her English pen pal.
“I saw your name in the pen-pal page of the Famous Funnies so I thought I would write to you.  Over here we get American comics two months later than you do.  We have to pay 2 pennies for them that is 4 cents.  The latest movies that have come round here are Mickey Rooney in Huckleberry Fin and Men with Wings.  My favorite hobby is model airplane building.  Could you tell me what “candy” really is, we keep on hearing it on the movies that we wonder what it is.” 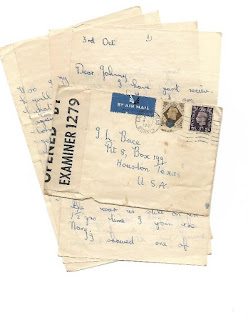 Letters written (1944) to my great aunt from a nephew POW during WWII. (He was a POW from 1942 to 1945 but was not able to contact family until 1944.)
“The Japanese authorities have been kind enough to grant the War Prisoners permission to write letters to the United Sates so I take this opportunity to let you and the folks know that I am alive and well.” 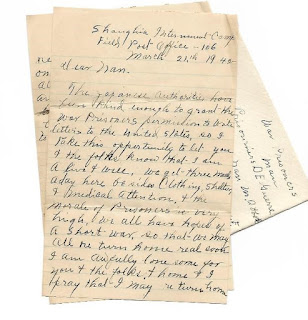 And letters from complete strangers (1944) that heard over the radio that this man was alive and a prisoner of war, in case his family didn’t know.  There were many dozens of those letters, notes, postcards.
“I picked up a message over my radio on April 9, 1944 from …..” 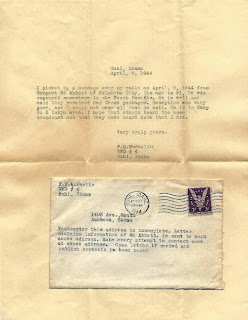 Letters written (1942-1946) to my Father by his buddies during World War II.
“You may not receive this for some time but I’ll start you a few lines anyway just to keep in touch.  As you can see, I have finally begun that long awaited journey across the ocean and believe me brother there is plenty of water in these parts!  I didn’t know it was possible to ride so long and see nothing but water!” 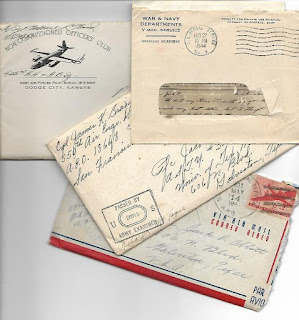 In addition to showing a different time and place, these letters show a side of individuals I had never seen.  For instance, my great aunt and uncle were always old to me.  Yet their letters revel a young romantic side to both.  My father was ….. well, my father.  The letters from his buddies show they were young and capable of getting into all sorts of mischief.  The letters written during the war were all similar in that they very seldom mentioned the actual act of waring.  Mother’s pen pal, a young boy of 12 or 13 was already living in war-torn England but he writes about the kind of music he likes (jazz) or things happening in school and comments briefly that the bombings “aren’t so bad”.  My relative that was a POW wrote about people at home.

I find it sad that letter “writing” is something we no longer do.  We can call just about anywhere, skype, or email.  Not the same.  Pretty handwriting has gone by the wayside.  Too bad.

And, I’m as guilty as the next person.  I used to write letters to greats and grands and parents, aunts and uncles but with the advent of the internet, I never actually use paper and pen.  I do still write the occasional letter but they magically zip from my computer to another but not the same.  Ah well.

I worry a bit there will be no written record and that my great grandchildren won’t know who I was. 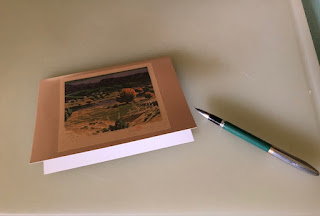